BY hellodrdavis on July 1, 2019 | Comments: 2 comments
Related : Soap Opera, Spoiler, Television, The Young and the Restless 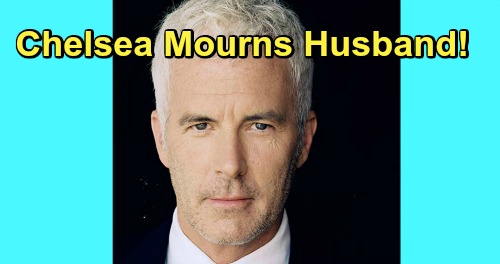 The Young and the Restless spoilers tease that Chelsea Newman (Melissa Claire Egan) will soon have some devastating news to process. As Y&R viewers know, Chelsea has just returned to Genoa City in a big way. She suddenly materialized and broke up a near fist-fight between Nick Newman (Joshua Morrow) and Adam Newman (Mark Grossman).

According to Y&R spoilers, Chelsea will proceed to tell Adam that she’s back in Genoa City for one and only one purpose: to tell him face-to-face that she wants him to leave her alone and move on with his life. Plus, she’ll want him to forget about having a relationship with their son Connor Newman (Gunner and Ryder Gadbois), because she doesn’t want Connor to even know he’s a Newman.

As Y&R viewers know, Chelsea has re-married and is happy and settled in her new life with her husband. And soon viewers will get to see Chelsea’s husband up close when Calvin Boudreau (John Burke) arrives in Genoa City on Tuesday’s new Y&R episode, July 2.  It looks like Calvin will follow Chelsea, but whether Chelsea knows that Calvin is coming remains to be seen.

Whatever the case, it certainly seems that tragedy will soon follow. In the recent edition of Soap Opera Digest, there’s a photo of Chelsea looking on in deep concern as Calvin is laying on a gurney while paramedic Elena Dawson (Brytni Sarpy) tends to him. It looks like Calvin will be carted off to the hospital, and things will get only get worse from there.

Y&R spoilers indicate that Chelsea will soon be in mourning, so it certainly seems that Calvin will not make it through his health crisis. This will ultimately free up Chelsea to be with Adam, but that pairing is probably a long way off since Chelsea will need time to mourn and get over her husband’s death.

It will also be interesting to see whether Adam has any role in Calvin’s health crisis. It’s always possible that Calvin falls victim to a stress-related event, such as a heart attack that is brought on by something Adam says or does. Details about this shocking event are scarce right now, but it should prove to be explosive for everyone involved.

Do you think that Adam will have something to do with Calvin’s death? Stay tuned to the CBS soap and don’t forget to check CDL often for the latest Young and the Restless spoilers, updates, and news.