The Young and the Restless Spoilers: Chelsea Rocked by Simon Black’s Arrival – Face from Her Past Blows Up Money Laundering Scandal?

BY Heather Hughes on October 12, 2019 | Comments: one comment
Related : Soap Opera, Spoiler, Television, The Young and the Restless 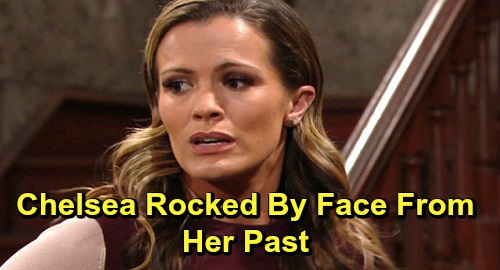 The Young and the Restless (Y&R) spoilers reveal that Jeffrey Vincent Parise (ex-Carlos Rivera on General Hospital) will head to Genoa City as Simon Black on November 1. This is just a short-term stint, but it should pack a punch. That’s because Simon’s got some unfinished business, and he intends to settle it once he arrives in town. Y&R’s staying tight-lipped on the details, but some interesting clues are emerging about Simon’s storyline.

The first hint comes through looking at Parise’s latest follows on his Twitter account. He followed The Young and the Restless’ main account along with their Y&R Insider account, so no surprise there. However, the only Y&R star Simon added was Melissa Claire Egan (Chelsea Newman). Hmm…it certainly sounds like Chelsea’s the one whose past will come back to haunt her.

It makes sense considering Chelsea has said repeatedly she wants to leave her conning ways behind her. Something tells us Chelsea did Simon dirty and now he probably wants her to pay up. On October 14, Chelsea reassures Kevin Fisher (Greg Rikaart) about the money he’s washing. She contends that it’s going in a security fund, and she probably won’t even touch it.

Of course, Simon’s arrival could force Chelsea to clean it out. She may make some suspicious moves that leave the whole operation in jeopardy. That could mean serious trouble not only for Chelsea but for Kevin, too. He just got off the hook for harboring a fugitive and doesn’t want to land in legal hot water again. Kevin’s counting on Chelsea to keep things quiet, but she may struggle thanks to Simon.

Some added drama could come through Nick Newman’s (Joshua Morrow) political aspirations. On October 14, Nick’s asked to run for office since a councilman’s stepping down. It’s something Nick will have to think about, but all the pieces are falling into place.

It’s easy to imagine Chelsea sparking a huge scandal for GC’s new hotshot politician. The media would love to hear all about Nick’s con artist girlfriend, who’s teamed up with another criminal to launder money. The Young and the Restless spoilers say it could bring some serious complications in Nick and Chelsea’s relationship.

Nothing’s set in stone here, but it’s looking more and more like Chelsea’s world will implode – and it could all start with Simon Black showing up to settle the score! We’ll give you updates as other Y&R news comes in. Stick with the CBS soap and don’t forget to check CDL often for the latest Young and the Restless spoilers, updates and news.