BY Heather Hughes on September 4, 2019 | Comments: one comment
Related : Soap Opera, Spoiler, Television, The Young and the Restless 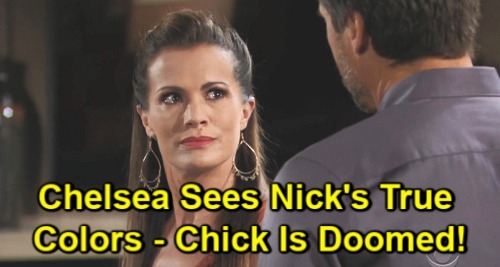 The Young and the Restless (Y&R) spoilers tease that Nick Newman (Joshua Morrow) may regret falling for Chelsea Newman (Melissa Claire Egan) again. It didn’t take long at all for Chelsea and Nick to reconnect. Chelsea certainly didn’t take time to grieve for Calvin Boudreau (John Burke)! She cared about Calvin on some level, but there were obviously no real sparks between them.

Adam Newman’s (Mark Grossman) comeback didn’t serve as a hurdle either, but that’s about to change. Chelsea seems to be in a far more forgiving mood lately.

Chloe Mitchell (Elizabeth Hendrickson) tried to kill Adam multiple times and ultimately destroyed Chelsea’s world – all while playing the part of the doting bestie. If Chloe can earn forgiveness so fast, surely there’s hope for Chelsea and Adam’s relationship.

Chadam Tension Is Lifting Thanks To Connor Newman

The “Chadam” tension has already been lifting thanks to Connor Newman (Judah Mackey), who adores his dad. The Young and the Restless spoilers say Adam will continue to prove himself as a father. The trouble is Adam’s other activities will prove quite dark. Chelsea will remain concerned about the example Adam is setting and how that darkness within him might rub off on their son.

However, Nick is destined to show his true colors as well. Don’t let Nick’s nice guy act fool you! Is he really any better than Adam? Nick was running around town in the mask of Victoria Newman’s (Amelia Heinle) abuser not too long ago. He terrorized his family all for the sake of getting the upper hand on Victor Newman (Eric Braeden), and that sounds an awful lot like what Adam’s been doing lately.

Chelsea’s worried about Adam’s influence right now, but that’ll shift to Nick down the road. The Young and the Restless spoilers say Adam will cross the line with Nick in the coming months.

Once Nick’s pushed to his limit, he’ll hold nothing back in his quest to make Adam pay. The result will be some Y&R ruthlessness that puts Chelsea and Nick’s relationship in jeopardy.

Will Adam end up injured thanks to Nick? Will there be some other type of devastation that Chelsea views as too cruel? Regardless, Chelsea will realize Nick isn’t quite the saint she’s made him out to be. Adam may not look so bad once Nick takes a dark turn of his own!

Are you eager to watch the “Chick” romance crash and burn? Are you rooting for a “Chadam” reunion? We’ll give you updates as other Y&R news comes in. Stay tuned to the CBS soap and don’t forget to check CDL often for the latest Young and the Restless spoilers, updates and news.