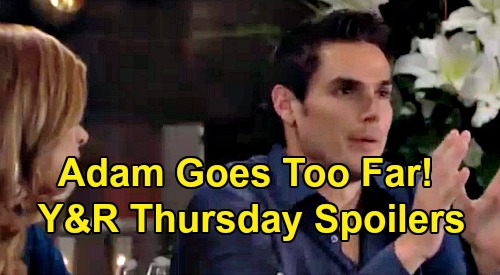 The Young and the Restless (Y&R) spoilers for Thursday, September 5, tease that Adam Newman (Mark Grossman) will play mind games with his father – at least he’ll try to. Victor Newman (Eric Braeden) is already wary, so his suspicions will only rev up when Adam pushes for peace. Nevertheless, Victor will agree to let Adam make his spiel. He’ll listen as his son offers to end to the war and make amends.

Adam will suggest that if Victor will just meet him halfway, they can move forward in peace. He’ll assure Victor that he doesn’t want all this fighting, but Victor just won’t buy it. The Young and the Restless spoilers say Victor will launch a speech of his own. He’ll contend that when he found Adam in Vegas, he felt relief and hope. Victor thought he’d have a chance to rebuild his relationship with Adam, but he’ll argue that Adam is trying to tear their family apart instead.

Despite Adam’s protests, Victor will send him away with a warning. He’ll make it clear that Adam will regret it if he goes down this dangerous road. Victor’s wise to be cautious when it comes to his sneaky son. Adam indeed has a plot cooking and it involves messing with the dosage of Victor’s medications.

Phyllis Summers (Michelle Stafford) gains access to Victor’s medical records on Wednesday, so Adam will be ready to do damage in Thursday’s episode. Y&R spoilers say Adam will take his scheme too far, so this could have dangerous consequences if he’s not careful. Altering Victor’s meds sounds like a disaster waiting to happen. Adam only intends to intensify Victor’s side effects, but what if things go horribly wrong?

Of course, don’t count Victor out when it comes to staying a step ahead of the game. There might be some sort of trap in play soon enough. Regardless, Adam’s going to get caught red-handed by Nikki Newman (Melody Thomas Scott) later this week. It sounds like this plot may blow up in Adam’s face before it ever really takes off.

In the meantime, Chloe Mitchell (Elizabeth Hendrickson) and Kevin Fisher (Greg Rikaart) will gamble with their freedom. The Billy Abbott (Jason Thompson) situation will prove tougher to handle than they thought. Billy isn’t going to like being held against his will at the boathouse, but it’s for his own good. As Chloe works to get through to him, Billy could cause plenty of problems.

Victoria Newman (Amelia Heinle) could create major issues as well, so Kevin and Chloe will have to take more risks to cover their tracks. The Young and the Restless spoilers say some great drama’s brewing, so stay tuned. We’ll give you updates as other Y&R news comes in. Stick with the CBS soap and don’t forget to check CDL often for the latest Young and the Restless spoilers, updates and news.