BY Heather Hughes on June 27, 2019 | Comments: one comment
Related : Soap Opera, Spoiler, Television, The Young and the Restless 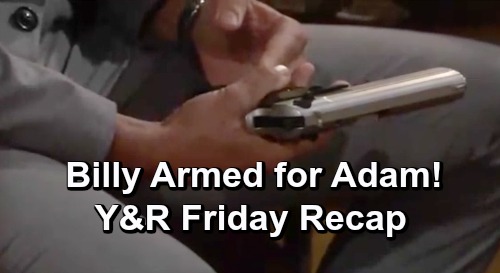 The Young and the Restless (Y&R) spoilers update and recap for Friday, June 28, tease that Chloe Mitchell (Elizabeth Hendrickson) will assure Billy Abbott (Jason Thompson) that it’s really her. He’ll continue to reel over the sight over Chloe and argue that she’s supposed to be dead. Chloe won’t have time to explain all the details, so she’ll get straight to the point. She’ll need Billy’s help since he’s the only person she can trust.

Chloe will tell Billy about shooting Adam Newman (Mark Grossman) and getting kidnapped. She’ll contend that Adam only freed her because of Kevin Fisher (Greg Rikaart). Chloe will feel like Kevin’s being forced to do Adam’s dirty work, so she’ll hope Billy can fix this. He’ll wonder if maybe Chloe could be cleared with a solid attorney’s assistance, but she’ll insist on staying “dead.”

Chloe won’t want Billy going after Adam; she’ll just need Billy to make sure Kevin comes home to her as well as Bella Fisher (Cali May Kinder). The Young and the Restless spoilers say Billy will promise to handle it for Chloe. Later, Billy will call out for his siblings at the Abbott mansion. Once he confirms no one is around, Billy will get his hands on a gun.

Meanwhile, Sharon Newman (Sharon Case) will run into Phyllis Summers (Michelle Stafford) at Society. She’ll lash out at the backstabber over the Dark Horse gig and accuse Phyllis of dragging Adam down in the mud with her. Phyllis won’t think her involvement really matters here. She’ll imply that Adam and his family would still be feuding without her help.

Sharon will suggest it’s just a matter of time until Phyllis screws up at Dark Horse. Phyllis will try to get a reaction out of Sharon by bringing up her connection to Adam. She’ll ask how Rey feels about Sharon’s unconditional love for her ex. Phyllis won’t think Sharon will be able to shove her feelings aside and pretend Adam’s not alive.

At the coffeehouse, Kevin will reveal the dirt he scored on Nick Newman (Joshua Morrow). Adam will be pleased when he watches a video of Nick peeling off the J.T. Hellstrom (Thad Luckinbill) mask. He’ll think Kevin’s done some great work. In fact, Adam will feel like Kevin is far too much of an asset to lose. He’ll hold Phyllis’ kidnapping over Kevin’s head in an attempt to score more assistance.

Afterward, Sharon will spot Adam and blast him for hiring Phyllis. He won’t want to talk about it and will add that he’s a disappointment to Sharon. Adam will think it’s best if they just keep their distance. Back with Kevin, he’ll seem flustered when he bumps into Phyllis and bolts.

Other Young and the Restless spoilers say Rey will have some news for Nick. Unfortunately, Riza Thompson (Tina Casciani) hasn’t been cooperative. Rey will insist that Riza’s done answering questions, but Nick will advise Rey to keep at it. He’ll think Rey can score more info if he confronts Riza in person.

Rey will fill Sharon in on his Vegas plans soon after. She’ll determine this must be about Adam, so she’ll argue that she should tag along. Sharon will suggest they need a getaway, but it seems she’ll really just want to stay in the loop on the situation. Back with Chloe, Kevin will catch up with her at the cemetery. He’ll offer reassurance as Chloe tries to say goodbye to Delia Abbott (Sophie Pollono).

At Dark Horse, Nick will be summoned for a meeting with Adam. After Adam plays the video, he’ll demand Christian Newman (Jude and Ozzy McGuigen) be taken to his penthouse tonight. Adam will feel confident he has the upper hand, but Nick will insist the cops already know.

Y&R spoilers say Adam will still believe the video’s useful. He’ll think he can use it to show Nick’s unstable and shouldn’t have custody of Christian. Adam and Nick will be about to come to blows when Chelsea Newman (Melissa Claire Egan) arrives. She’ll shout at the raging brothers to stop it right now.

At Devon Hamilton’s (Bryton James) penthouse, he’ll get agitated when Nate Hastings (Sean Dominic) and Ana Hamilton (Loren Lott) reach out. They’ll want to discuss Devon’s recent panic attack, but he’ll indicate that he’d rather talk to his therapist. Ana and Nate will feel like Devon is holding onto Hilary Hamilton (Mishael Morgan) too tight. They’ll want him to be free from the pain of the past.

Devon will show Nate and Ana the GC Buzz DVDs he watches frequently. He’ll contend that he wants to keep Hilary’s memory alive and likes seeing her again. Ana won’t think Devon should cling to things that remind him of Hilary; the memories should live inside him. She’ll feel like Hilary and Neil Winters (Kristoff St. John) can give Devon the strength to move forward.

Later, Devon will start putting his DVDs in a box. He’ll eventually abandon his mission and leave the penthouse. Based on next week’s info, it seems Devon will find a different strategy for closure. We’ll give you updates as other Y&R details emerge. Stay tuned to the CBS soap and don’t forget to check CDL often for the latest Young and the Restless spoilers, updates and news.