BY Heather Hughes on August 24, 2019 | Comments: one comment
Related : Soap Opera, Spoiler, Television, The Young and the Restless 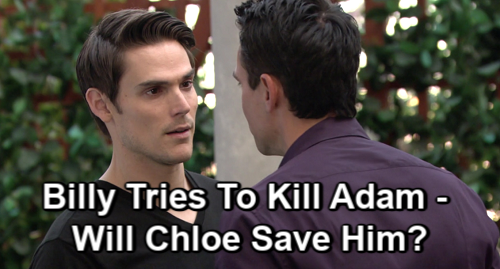 The Young and the Restless (Y&R) spoilers reveal that Billy Abbott (Jason Thompson) is battling a serious mental illness. Unfortunately, it’s impossible for him to know what’s actually going on. That’s because Billy has multiple personalities. He’s suffering from DID, which is short for dissociative identity disorder.

Billy has already been experiencing some memory gaps and those are about to get worse. During the week of August 26-30, Billy’s condition will really flare up. It’s getting harder and harder for Billy to live a normal life. He wants to be a family man and support Victoria Newman (Amelia Heinle) as well as the kids, but he can’t stop focusing on the kid he’s lost.

Between the trauma of Delia Abbott’s (Sophie Pollono) death and the anger that came with Adam Newman’s (Mark Grossman) return, it created the perfect storm. Billy has created at least one alter to deal with his troubling issues.

Victoria and Jack Abbott (Peter Bergman) have certainly been concerned about Billy lately. They have no idea that Billy’s about to spiral out of control like never before.

Y&R spoilers say Billy’s alternate personality will be behind a break-in. He’ll swipe a handkerchief from Adam’s penthouse – one that belonged to Adam’s mom, Hope Wilson (Beth Toussaint). Billy will eventually snap out of this episode and become perplexed. He won’t know what he’s been up to, but holding the handkerchief will revive his alter and spark a terrible decision.

Since this is Billy’s alter we’re dealing with, anything goes. This isn’t the real Billy. That means Billy could easily try to target Adam’s kids as part of their upcoming showdown. There’s always a chance that Billy’s alternate personality is pure evil. Maybe it’ll be a manifestation of his darkest thoughts.

Will Chloe Mitchell End Up Making Amends For Previous Attempts?

Regardless, The Young and the Restless spoilers say Billy and Adam will have the ultimate face-off. Adam may start to fear this is the end of the road. A gun could be pointed in his face soon enough, but someone will manage to save the day.

Chloe Mitchell (Elizabeth Hendrickson) just might swoop in and rescue Adam from a horrible fate. This could be Y&R’s way of letting her make amends for her previous attempts to kill Adam. As for Billy, this should lead to his wild diagnosis and the treatment he so desperately needs. Billy can’t keep ignoring the problem; that’ll become crystal clear after his alter tries to carry out such deadly plans!