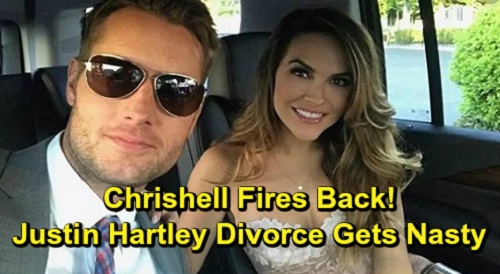 The Young and the Restless (Y&R) spoilers reveal that there’s been another development in the divorce of two soap stars. Y&R fans remember Justin Hartley for his work as Adam Newman (now played by Mark Grossman) in Genoa City, and many viewers followed his rise to stardom as Kevin Pearson on This Is Us. Chrishell Stause is also known in the soap world for roles like Bethany Bryant on Y&R and Jordan Ridgeway on Days of Our Lives.

You may have heard Hartley filed for divorce from Stause on November 22 – and he listed July 8 as the day they separated. According to TMZ, Stause disputes that separation date and recently filed a response to Hartley’s divorce petition. In her legal documents, Stause indicated that the divorce was a bigger shock to her than Hartley let on. She put down November 22 as the separation date, which is the same day Hartley filed.

In other words, Stause is suggesting she was blindsided by Hartley’s decision. She’d been spotted at events with Hartley over the past few months and had happily been posting couple photos online. The pair may have had issues they were keeping under wraps, but Stause was certainly quick to shut down that July separation. There’s undoubtedly more to the story that none of us will ever know.

As for the rest of Stause’s divorce petition response, she pushed for spousal support and for Hartley to cover her legal fees. However, Hartley has indicated that he’s not on board with paying for either of those. Stause also revealed that she intends to go back to her maiden name, which we’ve been using in this post. After reflecting on her ex’s move, it seems Stause is ready to drop Hartley in more ways than one!

This news comes just a day after Stause posted a cryptic message across her social media accounts. That message said, “It’s hard to watch people change right in front of you. But it’s even harder remembering who they used to be. -Nishan Panwar” Stause was with Hartley for three years before he proposed, and they were married for another two years. It’s a shame to see a once happy couple split, but it sounds like they’ll both be better off moving on at this point.