BY hellodrdavis on December 3, 2019 | Comments: 2 comments
Related : Soap Opera, Spoiler, Television, The Young and the Restless 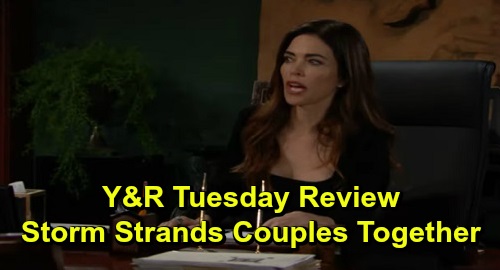 The Young and the Restless spoilers review for Tuesday, December 3 tease that a huge storm will befall Genoa City, and several mismatched couples will ride out the storm together after the power goes out. Each couple will talk and gain some insight from the other person, even though that person isn’t their current romantic partner.

Still at the dive bar together, Billy Abbott (Jason Thompson) and Amanda Sinclair (Mishael Morgan) will realize that they’re stuck until the weather dies down a bit. They’ll discuss the creep that was bothering Amanda earlier, and Amanda will remark that she’s “had a lot of practice” with men that think they can behave any way they want. Amanda will then remark that Billy seems lost.

Victoria Newman (Amelia Heinle) will be at Newman Enterprises when Rey Rosales (Jordi Vilasuso) comes in with an update about a recent theft at the Newman warehouse. When the power goes out, Victoria’s electronic door will be stuck shut, and Rey will try to pick the lock, to no avail. Throughout the course of their conversation, he’ll apologize to Victoria for falsely arresting her, and she’ll show understanding.

The two will then work together to open the door, which will be a success. Victoria will pour herself a drink and compliment Rey on being funny, and he’ll tell her in Spanish that she’s cool. Victoria will then head home, where she’ll text Billy wanting to know if he’s still with Jack Abbott (Peter Bergman). Billy will then show up, and they’ll hug as Billy says it’s good to be home.

At Nick Newman’s (Joshua Morrow) place, Phyllis Summers (Michelle Stafford) will barge in looking for Chelsea Lawson (Melissa Claire Egan). She’ll spew venom against Abby Newman (Melissa Ordway) and Chelsea, irritating Nick. The two will bicker and Phyllis will threaten to leave, but Nick will stop her for her own safety. They’ll then sit in awkward silence until Nick initiates a video game contest.

That will lead to a deeper conversation about their relationship and how he is a fundamentally decent person but can’t forgive her, which will make her emotional. Phyllis will compliment his personality and they’ll share some touching moments as Phyllis demonstrates incredible insight into Nick’s persona. Nick will then talk about Phyllis and how she craves love, family, and respect on the inside.

Phyllis will be touched by Nick’s words and a bit startled to know how well he knows her. She’ll tear up about who she is inside, and she’ll thank Nick for not totally abandoning her. She’ll ask if he ever thinks of them together, and he’ll say yes, especially when Summer Newman (Hunter King) looks a certain way. They’ll agree that what they had was special.

In the dark, Phyllis will be about to touch Nick’s shoulder when the lights come on. Phyllis will then put on her coat, and Nick will say that taking a walk down memory lane was a good way to ride out the storm. Phyllis will leave, while Nick looks after her.

At Adam Newman’s (Mark Grossman) penthouse, he and Chelsea will argue about Nick and his dislike of Chelsea’s decision to move in. When the lights go out, Connor Newman (Judah Mackey) will call out for his mom and dad. Connor will be upset about the monster, who he’ll think is in the house. He’ll tell his parents that they should be afraid, too.

Later, after Connor’s sleeping, Chelsea and Adam will talk about happier times back when Connor was a baby. Chelsea will that she’s really scared about Connor, and that they are stuck while Connor keeps getting worse. Adam will think that he’s the problem, that he’s traded chaos his whole life, and that maybe he’s the monster that Connor’s afraid of.

Chelsea will note that Adam has changed into a doting, loving father. She’ll give him a pep talk about her trust in Adam’s ability as a father. Adam will thank her for her kind words. They’ll discuss what might have been between them as a family, and Chelsea will say that their job is now to save their son, since he saved them from who they were. Chelsea will then fall asleep on the couch, and Adam will gently put her hair behind her ear.