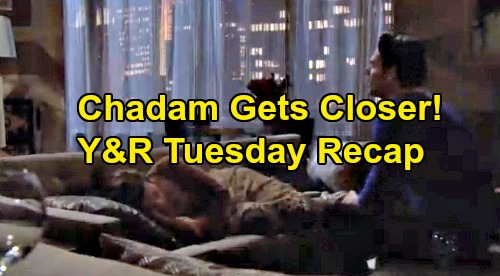 The Young and the Restless (Y&R) spoilers recap for Tuesday, December 3, teases that a storm will leave several Genoa City residents in surprising situations. At the dive bar, Billy Abbott (Jason Thompson) and Amanda Sinclair (Mishael Morgan) will get severe weather updates on their phones. They’ll realize they’re going to be stuck there for a while – especially once the power goes out.

Amanda and Billy will make the best of it by sharing some nice moments. When Amanda notes that Billy seems lost, he’ll talk about taking a wrong turn and admit that’s happened a lot in his life. Billy will appreciate the fact that he can come to this dive bar and be anonymous. Amanda will be in the same boat, so she’ll think they found the right place for refuge.

Billy will add that he feels like he’s playing a role sometimes. After Amanda asks what makes Billy happy, he’ll confess he’s not sure. At Newman Enterprises, Victoria Newman (Amelia Heinle) will get a visit from Rey Rosales (Jordi Vilasuso). He’ll give her the latest news on a Newman warehouse theft before talk turns to the nasty weather.

Once the room goes dark, Rey and Victoria will find out they’re locked in without power. Y&R spoilers say Rey will try to jimmy the lock with a paperclip, so Victoria will think he’s quite the handyman. That’ll lead to Rey telling a story about a broken air conditioner before he ultimately apologizes for arresting Victoria. After Victoria uses her high heel to open the lock, Rey will give her a high five. Victoria will pour herself a drink and earn some cool points with Rey.

Other Young and the Restless spoilers say Phyllis Summers (Michelle Stafford) will arrive at Nick Newman’s (Joshua Morrow) house. She’ll want to rant at Chelsea Lawson (Melissa Claire Egan), but she’ll be informed that Chelsea’s at Adam Newman’s (Mark Grossman) penthouse. Phyllis will gripe that Chelsea might as well move in there, which will leave Nick looking glum.

After the power goes out, Phyllis and Nick will end up arguing a bit. However, Nick won’t let Phyllis go out in the storm, so she’ll stick around to play a videogame with him on their phones. Nick will question if Phyllis really thinks he’s always judging her. Phyllis will eventually admit it feels like she’s the only one Nick’s not very forgiving of.

The Young and the Restless spoilers say Nick and Phyllis will reflect on how well they know each other. They’ll discuss Nick’s inner Newman battle and his old fantasy of being a pro baseball player. Nick will also think he understands Phyllis, who craves love and respect under her hard exterior. Phyllis will get a little emotional over the fact that somebody gets her.

Nick will suggest Phyllis is a fighter, but all that fighting must be hard. Phyllis will just be pleased that she didn’t push Nick away completely. She’ll broach the topic of whether Nick ever thinks of them together, so he’ll admit he does sometimes. They’ll laugh about how depending on whether their romance was working, it was either a comet or a bomb.

At Adam’s place, Chelsea will show up and address how Nick isn’t a fan of this arrangement. Adam will be miffed that Nick thinks he’d use Connor Newman’s (Judah Mackey) pain to get Chelsea in bed. The blackout will leave Connor terrified, but Adam and Chelsea will try to calm him down.

Once Connor’s back to sleep, Adam think back on better days. He’ll blame himself for causing the chaos in Connor’s life, but Chelsea will acknowledge the changes Adam’s made. Adam will still feel like there’s a dark side within him. Chelsea won’t think it makes a difference in how Connor feels about his dad. He adores Adam no matter what, and Chelsea believes Adam’s a better father that Victor Newman (Eric Braeden).

Chelsea will confess she thinks about what might’ve been, but they shift the conversation to Connor and helping him through his crisis. Once the power’s back, Adam will lower the lights once more and gaze at Chelsea asleep on the couch. He’ll push a strand of hair behind Chelsea’s ear tenderly. Looks ‘Chadam’ is destined to happen!

Back at Nick’s place, their warm moment will be interrupted by the lights returning. Phyllis will get her coat and prepare to leave, so Nick will suggest he’s grateful for the walk down memory lane. He’ll seem deep in thought as Phyllis heads for the door.

Over at the dive bar again, Billy will suggest Amanda should look him up if she wants to ride out another storm together. Amanda will agree she just might, and the pair will part ways for the evening. Afterward, Billy will make it back to the house and tell Victoria he’s glad to be home.