The Young and the Restless Spoilers: Christian Custody War Explodes – Hypocritical Nick Facing Karma or Is Adam a Monster?

BY Heather Hughes on June 29, 2019 | Comments: one comment
Related : Soap Opera, Spoiler, Television, The Young and the Restless 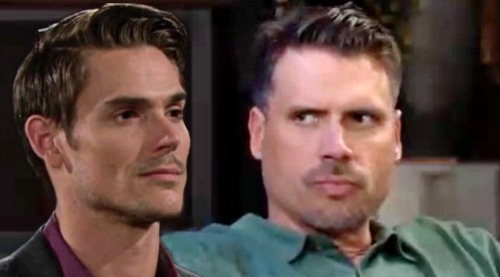 The Young and the Restless (Y&R) spoilers tease that a major custody battle is about to go down. Both sides are gathering ammunition at the moment. Adam Newman (Mark Grossman) is determined to raise his biological son, so he’s willing to play dirty to make it happen.

Of course, Nick Newman (Joshua Morrow) is equally determined to keep custody of Christian Newman (Jude and Ozzy McGuigen). He’s also on a mission to secure a win in court. The custody case has left Y&R fans divided about who Christian belongs with. Adam has a legal right to pursue this, even if he did change the paternity test in the past.

At the same time, Adam clearly isn’t in Daddy mode these days. Can he really be a good father to Christian when he’s so deep in the darkness? There’s also been a lot of talk about Nick being the only dad Christian’s ever known, which is true. However, that’s only because Christian wasn’t old enough to remember his first stand-in Daddy, Dylan McAvoy (Steve Burton).

Is the current custody mess karma for what happened back then? Does it make Nick a bit of a hypocrite now? Nick behaved horribly in the aftermath of the “Sully is Christian” revelation. Once Nick found out Sharon Newman (Sharon Case) hid the truth, he came over and demanded Christian on the spot. Nick didn’t care about Dylan’s sudden heartbreak or even Christian’s well-being.

Let’s consider some quotes from that night, shall we? “That is MY son! He is MINE! That is my child…you cannot stop me from seeing him!” Nick shouted all that before grabbing Christian from his crib. When Dylan and Sharon begged Nick to wait until morning, Nick wasn’t having it.

“I’m done listening to you! I’m done! Do you see what’s in front of you? A father holding his son. That’s right. It’s me,” Nick said. Now it’s important to remember that Nick was understandably shaken and outraged at the time, but still…he was awfully heartless. He treated Dylan, who was a victim in all of this, like garbage – even though Dylan had been a great dad to “Sully” aka Christian.

Nick was certainly concerned with biological ties before he knew Christian wasn’t really his, now wasn’t he? The Young and the Restless viewers can feel sorry for Nick now and still think he has this custody blow coming. It doesn’t mean you should necessarily be rooting for Adam, but it does make it a complex, interesting situation.

The Young and the Restless spoilers say Adam and Nick’s war will spiral out of control in the weeks ahead. Is Nick a hypocrite who’s facing just karma or is Adam a monster who must be stopped? We’ll give you updates as other Y&R news emerges. Stay tuned to the CBS soap and don’t forget to check CDL often for the latest Young and the Restless spoilers, updates and news.