BY Heather Hughes on August 7, 2019 | Comments: one comment
Related : Soap Opera, Spoiler, Television, The Young and the Restless 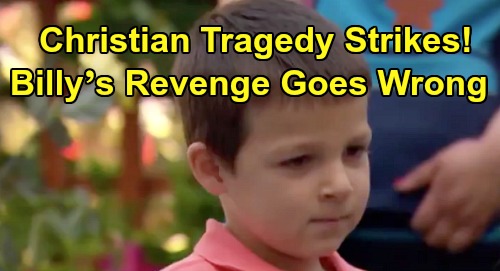 The Young and the Restless (Y&R) spoilers reveal that the CBS soap is clearly gearing up for something big. Billy Abbott (Jason Thompson) has slowly been losing his grip on reality. Whether someone’s gaslighting Billy or not, he’s spiraling out of control. Billy truly believes Delia Abbott (Sophie Pollono) wants him to stop Adam Newman (Mark Grossman) – and that can only spell trouble.

At one point, Billy got a gun out and admitted he fantasized about killing Adam. He’s expressed intense hatred for Adam on plenty of occasions. Billy’s therapist pointed out that Delia’s death was merely a horrible accident, but Billy just can’t seem to accept that. The cover-up afterward was a bad call, but Adam didn’t intentionally kill Delia or set out to harm her in any way.

It’s understandable that Billy wouldn’t want to be best buds with the guy who killed his daughter – intentionally or not. That’s especially true since Adam tends to be so manipulative and smug. He doesn’t give most of his fellow Genoa City residents a reason to like him. However, Billy’s dark obsession with revenge is misplaced and is about to go way too far.

Of course, we have to consider why Y&R is revisiting all this. The Young and the Restless Head Writer and Co-Executive Producer Josh Griffith was quite proud of Delia’s death story, so that’s one reason. Another one may be to give Billy true closure. What could help Billy finally accept that this was an accident? Is there something that could snap Billy out of viewing Adam as a murderer?

We’d say there’s a way, but it could be quite grim. The Young and the Restless might’ve offered a hint during Billy’s recent interaction with Adam. Just before Adam was set to see Christian Newman, Billy confronted him in the park about the doll in his bed. He assumed Adam was messing with him, but Adam insisted he wouldn’t disrespect Delia’s memory like that.

Adam then mentioned his upcoming visit with Christian, which led Billy to suggest he should cherish every moment – an obvious dig since Billy has no more moments to cherish with Delia. Is that a clue that Billy’s revenge plot will go horribly wrong? Could Christian be the one who lands in deadly danger?

Now we’re not suggesting that Y&R will kill off another child. They certainly could since they’ve done it before, but it seems unnecessary here. There’s no need to go eye for an eye. Christian could simply be seriously injured thanks to Billy’s efforts for vengeance.

It makes sense considering Chloe Mitchell (Elizabeth Hendrickson) already shot Adam, so we did the whole “fight for his life in the hospital” thing. Doing it again would be far too repetitive. Maybe Y&R will swap Christian in for Adam this time. Whether Christian gets hit by a car like Delia or faces another tragic twist of fate, Billy could inadvertently hurt him.

This fits perfectly since Billy’s been bonding with Christian a bit more at home. Victoria Newman (Amelia Heinle) was named Christian’s temporary guardian, and it may be meant to tie in with this plot. There’s a chance Connor Newman (Judah Mackey) could be the victim instead, but it makes more sense to use Christian since he’s been at the center of the action lately.

Do you think Billy will go after Adam and accidentally harm Christian instead? Could that make him see Adam’s perspective? The Young and the Restless spoilers say the drama’s set to rev up in GC. We’ll give you updates as other Y&R news comes in. Stay tuned to the CBS soap and don’t forget to check CDL often for the latest Young and the Restless spoilers, updates and news.