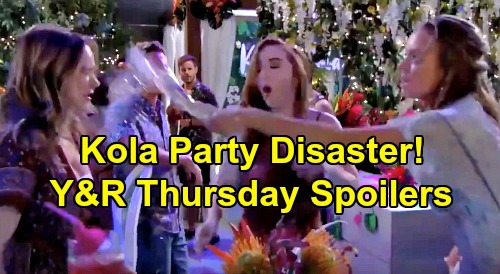 The Young and the Restless (Y&R) spoilers for Thursday, August 8, tease that an action-packed episode’s coming up. First, we’ll see a big return and an important recast. Anita Lawson (Catherine Bach) will make her Genoa City comeback with a new Connor Newman (Judah Mackey) in tow. Y&R viewers can expect Chelsea Newman (Melissa Claire Egan) to catch up with her mom and discuss what’s next for Connor.

Of course, Chelsea will have to figure out how to tell Connor his father is alive. The kid just lost his stepfather, Calvin Boudreau (John Burke), so he’s facing a lot of shockers in the dad department. However, Connor always had a strong bond with Adam Newman (Mark Grossman). It’ll be interesting to see how Connor reacts, especially if he picks up on Chelsea and Nick Newman’s (Joshua Morrow) issues with Adam.

Meanwhile, Lola Rosales (Sasha Calle) and Kyle Abbott’s (Michael Mealor) pre-wedding bash will get underway. Mariah Copeland (Camryn Grimes) is throwing them one final fiesta before they get hitched, but this party will come with a few snags. The first will strike when Sharon Newman (Sharon Case) and Rey Rosales (Jordi Vilasuso) arrive.

Mariah was hoping to do a little matchmaking and push “Shey” back together. She doesn’t realize Sharon’s been busy hooking up with Adam. Rey spots Sharon at Adam’s place on Wednesday, so that’ll make the tension even worse in Thursday’s episode. Things will be incredibly awkward, but Sharon and Rey may ultimately grin and bear it for “Kola’s” sake.

Over with Theo Vanderway (Tyler Johnson), he’ll infuriate Kyle by showing his face at the shindig. Lola will push Kyle to chill and give Theo a chance. She won’t want her fiancé causing a huge scene, and she’ll think their conflict can be resolved anyway. Lola doesn’t know Theo has the power to blow up Kyle’s world in a New York minute!

Later, The Young and the Restless spoilers say Theo will cause drama with a cryptic toast. He’ll allude to Kyle’s dark past as he addresses his former friend and the rest of the crowd. Kyle will grow nervous, but Theo will hide the truth for now. Since the wedding will kick off in the week ahead, that’ll provide another opportunity for bombshells.

Summer Newman (Hunter King) and Abby Newman (Melissa Ordway) also have a major confrontation brewing. They’ll get into a serious catfight within the next episode or two, so The Young and the Restless fans won’t want to miss it. We’ll give you updates as other Y&R news comes in. Stay tuned to the CBS soap and don’t forget to check CDL often for the latest Young and the Restless spoilers, updates and news.