BY Heather Hughes on November 14, 2019 | Comments: one comment
Related : Soap Opera, Spoiler, Television, The Young and the Restless 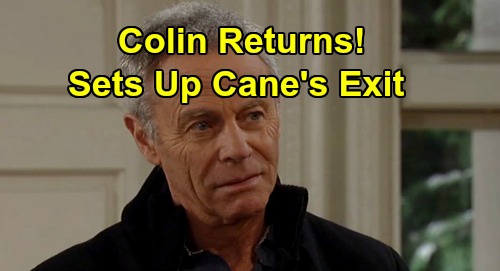 The Young and the Restless (Y&R) spoilers reveal that a big return is on the way, and it should tie in with a major departure. Tristan Rogers will head back to Y&R later this month for a two-day gig as Colin Atkinson. Colin’s brief stint was originally set to start on November 20, but that date will change thanks to impeachment hearing coverage and any preemptions that result.

We’ll keep you posted as we get closer to Colin’s upcoming appearances, but we know Colin will indeed be part of the story. Since Rogers currently plays Robert Scorpio over on General Hospital, fans wondered if he would make a Y&R comeback. Sometimes it can be tricky to work out two different soap schedules, but it thankfully all came together. GH had a production break, which allowed Rogers to head on over to The Young and the Restless to film briefly.

In an interview with Soap Opera Digest, Rogers talked about his exciting comeback. He was particularly thrilled to reunite with Jess Walton (Jill Abbott) for some new scenes. “It’s a delight,” Rogers said. “It’s like we’ve never been away from each other.”

Nevertheless, Colin has definitely been away – and up to something! At least that’s what Jill suspects and wants to get to the bottom of. She’ll manage to track Colin down and confront him about Katherine Chancellor’s (Jeanne Cooper) will. Did Katherine really leave the bulk of her fortune to Cane Ashby (Daniel Goddard) or is this just a scheme Colin cooked up?

Jill will demand some answers, so Colin will really be put on the spot. He’ll spin quite a story, which will leave Jill a bit torn. Part of Jill will want to believe Colin, but he can certainly be a crafty character. Everything about this will mess screams scam, so there has to be something under the surface here.

No matter what Jill decides, this is all building to Cane’s looming exit. Will Cane try to take the money and run? Will he do the right thing and give it back if this is just Colin’s plot? There are some interesting places for Y&R to take this as Cane’s departure approaches.