The Young and the Restless Spoilers: Monday, November 18 – Chance Warns Adam About Secret, Phyllis Is a Threat – Nick Ends Campaign

BY Heather Hughes on November 14, 2019 | Comments: one comment
Related : Soap Opera, Spoiler, Television, The Young and the Restless 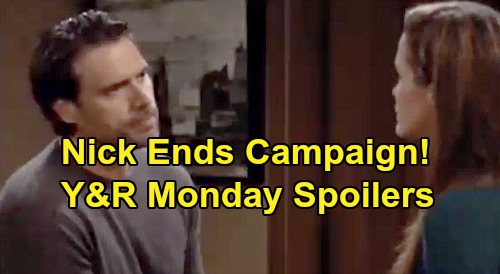 The Young and the Restless (Y&R) spoilers for Monday, November 18, tease that some schemers and snoopers. Before we get to all the drama, we should note that impeachment hearing coverage is throwing off Y&R’s schedule a bit. Due to preemptions, the action happening in this episode should hit the screen on Monday. With that in mind, let’s dive in and see what’s going on in Genoa City.

For starters, Abby Newman (Melissa Ordway) will talk to Rey Rosales (Jordi Vilasuso) about the Grand Phoenix’s latest nightmare. She’ll be irritated over all the cancellations and Chelsea Lawson’s (Melissa Claire Egan) connection to Simon Black (Jeffrey Vincent Parise). Abby will also hint about needing info that could push Phyllis Summers (Michelle Stafford) out of the picture, but Rey won’t be able to help with that.

Instead, Rey will pass Abby off to Kevin Fisher (Greg Rikaart), who’ll seek updates on Chelsea. When Kevin’s interest seems excessive, Abby will call him out on it. She’ll be curious why Kevin’s so concerned, but he’ll just act like Abby’s paranoid.

At Adam Newman’s (Mark Grossman) place, Phyllis will help herself to a drink and ignore Adam’s attempts to make her leave. Phillip “Chance” Chancellor IV (Donny Boaz) won’t be keen on having Phyllis there either, but she’ll insist on sticking around. Chelsea will bring up Chelsea and wonder if she’s a liability. She’ll pose the question to Chance, who wouldn’t fill Phyllis in even if he knew.

Adam will suggest that if Phyllis wants answers, Chelsea’s the one she should be talking to. He’ll tell Phyllis to get out, but she’ll mention Adam’s history before she goes. Phyllis will suggest she’s aware of Adam’s tricks and doesn’t buy that he’s changed.

Once Chance and Adam are alone, they’ll ponder how much Phyllis really knows. Chance will point out that Phyllis could’ve picked up on something in Vegas. Adam won’t think Phyllis found out anything, but Chance will offer a reminder. It wouldn’t work out well for them if Phyllis learned about actually happened.

Adam will push Chance to let him take care of Phyllis, so Chance will relent. However, he’ll warn that Adam had better not let his problem become their problem. In Victoria Newman’s (Amelia Heinle) office, Billy Abbott (Jason Thompson) will catch her off guard. Victoria will still have some work to do, but Billy will keep pushing for kisses and more.

Once Victoria opts to live a little, she’ll express how much she likes that Billy’s exciting and unpredictable. Something tells us Victoria will be singing a different tune down the road! In the meantime, Jack Abbott (Peter Bergman) will head over to the ranch for some campaign talk with Nikki Newman (Melody Thomas Scott). He’ll think Nick Newman (Joshua Morrow) just needs to ride this out and not give up.

Victor Newman (Eric Braeden) will feel like they need to focus on Nick and how this crisis has affected him personally, not the campaign. After Victor leaves the room, Nikki will mention that Victor wasn’t exactly thrilled about Nick’s run for city council. At home, Nick will have a tense call with a reporter as Chelsea listens. She’ll look worried as Nick snaps about staying in the race and making a statement later.

Once Nick’s off the phone, he’ll tell Chelsea things are just going to get worse. Chelsea’s apologetic and wants Nick to let her have it, but he’ll shut down the idea. As they debate what Nick’s next move should be, Chelsea will offer to make a confession to the media. Nick won’t think that would help since Chelsea could land in prison. It wouldn’t improve the public’s opinion of his judgment either.

Chelsea will hate the idea of Nick throwing in the towel on his dreams, but he’ll eventually decide it’s what he has to do. Nick will give Jack a call while he’s still with Victor and Nikki. He’ll reveal that he’s dropping out of the race and intends to concentrate on his family.

Back at the Grand Phoenix, Phyllis will interrogate “Agent Fisher” about his feds charade with Chloe Mitchell (Elizabeth Hendrickson). She’ll think Kevin can help her make the connection between Simon, Chance and Chelsea. Kevin won’t share anything, but he’ll suggest Phyllis also suspected something was up before the hostage crisis. She just didn’t come out with it because she’s plotting to take back the hotel.

Phyllis will argue that Kevin has quite an imagination before she finds Abby. The Grand Phoenix partners will discuss the security system, which Phyllis will think saved the day. The Young and the Restless spoilers say Abby will still think Phyllis has something up her sleeve. Phyllis will just shift Abby’s attention to Chelsea and all the damage she’s done to their business.