The Young and the Restless Spoilers: Cover-Up Crew Alliance Shatters – Sharon and Phyllis Turn On The Newmans

BY hellodrdavis on January 21, 2019 | Comments: one comment
Related : Soap Opera, Spoiler, Television, The Young and the Restless 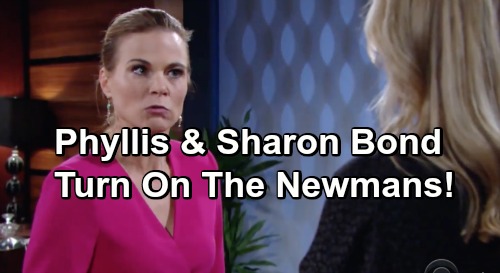 The Young and the Restless spoilers tease that the cover-up crew’s alliance may be falling apart at the seams. Nikki Newman (Melody Thomas Scott), Victoria Newman (Amelia Heinle), Phylis Summers (Gina Tognoni), and Sharon Newman (Sharon Case) have been steadfast partners ever since Nikki killed JT Hellstrom (Thad Luckinbill) with a fireplace poker in Victoria’s bedroom.

The crew members haven’t always gotten along, and there have been a lot of internal struggles within the group, but they’ve always stuck together. But it looks like that’s about to change.

For Phyllis, Nikki did the unthinkable and unforgivable when she told Nick Newman (Joshua Morrow) and Victor Newman (Eric Braeden) that she killed JT. Sure, Nikki left out the fact that Phyllis and Sharon were in any way involved in the coverup and disposal of JT’s body, but Phyllis still considers this a betrayal of herself and Sharon.

As far as Phyllis is concerned, the Newmans will likely concoct a plan to pin the whole murder and coverup on her and Sharon. She figures that since the Newmans are all-powerful and always stick together, they’ll find a way to avoid responsibility while someone else takes the rap. But Phyllis is determined not to go down for a crime that Nikki actually committed.

In the coming days, look for Phyllis to work hard on Sharon. She’ll try to convince Sharon to form a pact with her and abandon her alliance to the cover-up crew. According to Y&R spoilers, Sharon will initially resist, but eventually she’ll come to believe that a new pact with Phyllis is the way to go.

Worried that Victor, Nikki, Victoria, and Nick are conspiring to work against herself and Phyllis, Sharon will ultimately agree to form a new alliance with Phyllis to save their skins. Exactly what Phyllis and Sharon are going to do remains to be seen, but it’s likely that their pact will remain a secret, and that they’ll lead Nikki and Victoria to believe that they are still in alliance with them.

That’s really the only way that Phyllis and Sharon will be able to get information on what’s going on with the Newmans…unless, as some have speculated, Phyllis is the person who has been surveilling the Newman ranch. If she is that person, then we might see her let Sharon in on that fact very soon.

Do you think that Phyllis and Sharon have any shot at escaping blame for the JT coverup, now that Nikki and Victoria have let Victor and Nick in on the secret? Stay tuned to the CBS soap and don’t forget to check CDL often for the latest Young and the Restless spoilers, updates, and news.