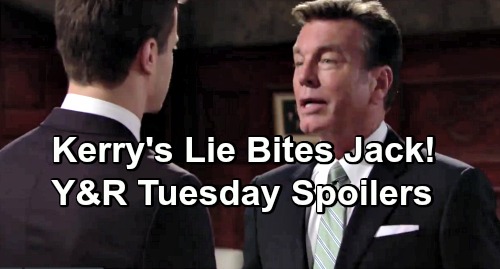 The Young and the Restless (Y&R) spoilers for Tuesday, January 22, tease that Jack Abbott (Peter Bergman) will think life’s looking up. He thought Kerry Johnson (Alice Hunter) was exhibiting some strange behavior recently, but she managed to cover her blunder. Jack’s pretty smitten, so he can let a lot slide anyway.

However, there’ll soon be a problem that Jack just can’t ignore. The Young and the Restless spoilers say Kerry will lie to Jack, which wouldn’t be an issue if she was good at it! Unfortunately, she won’t be. That’s why it won’t be long until Jack trips her up and wonders what else Kerry’s keeping from him.

Y&R fans know Jack was burned badly by Phyllis Summers (Gina Tognoni) and Billy Abbott (Jason Thompson). He was in love with Phyllis, but she broke his heart by betraying him with his own brother. It took a while for Jack to move past all that, but he finally did. Still, Jack won’t be anxious to sign up for more heartache. His wound is fairly fresh, so it’s understandable that he’d have concerns about secrets.

The Young and the Restless spoilers say Jack will open up to Kyle Abbott (Michael Mealor) at some point. He’ll feel like it might be time to part ways with Kerry. Jack will suggest that it was fun while it lasted, but he needs a woman he can trust.

Since Kyle’s a bit of a romantic, he may not think that’s the right choice. Kyle might contend that a good relationship takes honesty and effort. He’s a big believer in multiple chances and stepping up to make it right.

Kyle may encourage Jack to call Kerry out and be upfront about what he expects. That’s the guidance he gave Mariah Copeland (Camryn Grimes) when her issues with Tessa Porter (Cait Fairbanks) first started. It’s also how things played out for Kyle in his relationship with Lola Rosales (Sasha Calle). It must be solid advice since both couples made it work.

While Jack figures out what to do, Cane Ashby (Daniel Goddard) will deck Billy Abbott (Jason Thompson). He’ll be outraged over Billy’s decision to spill his secret to Lily Ashby (Christel Khalil). Cane will point out that his family was already struggling, but Billy made it even worse. Billy, on the other hand, may think Cane did that himself when he kissed Victoria Newman (Amelia Heinle)!

Billy and Cane will have a minor brawl, but it’ll end with a promise. Cane’s going to get Billy back for this, so he’d better be ready. Over with Nick Newman (Joshua Morrow), he’ll think something weird is going on with Phyllis. Nick will grill her after he gets suspicious about her motives, but Phyllis will undoubtedly deceive him.

Perhaps Nick will realize Phyllis and Sharon seem a little too chummy. They’ll actually be forming a secret alliance, but Phyllis may have to lie about another infamous project. We’ll give you updates as other Y&R news comes in. Stay tuned to the CBS soap and don’t forget to check CDL often for the latest Young and the Restless spoilers, updates, and news.