The Young and the Restless Spoilers: Phyllis and Sharon Fear Victor Will Frame Them for J.T.’s Murder – Coverup Crew Fractured

BY Heather Hughes on January 20, 2019 | Comments: one comment
Related : Soap Opera, Spoiler, Television, The Young and the Restless 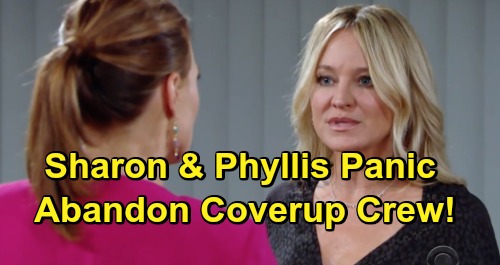 The Young and the Restless (Y&R) spoilers tease that Phyllis Summers (Gina Tognoni) will grow concerned about her current alliance. She’ll feel like Victor Newman’s (Eric Braeden) involvement in this has thrown everything off. Phyllis won’t be happy about Nick Newman’s (Joshua Morrow) inclusion either. She’ll know that protecting Nikki Newman (Melody Thomas Scott) is his priority and that could spell trouble.

Phyllis cares about Nick, but she has to look out for herself here. That means teaming up with one of her worst enemies. It’s no secret that Phyllis and Sharon Newman (Sharon Case) don’t get along, but she’s Phyllis’ best shot at a new ally. For starters, Sharon is pretty easy to influence. She can be talked into just about anything, so Phyllis will already have that advantage.

Plus, it’s not like Phyllis can out on any other cover-up crew member. She views the Newmans as the real problem here. Phyllis will feel like Victoria Newman (Amelia Heinle), Nikki, Nick and Victor would all turn against her in a heartbeat. She’ll work to convince Sharon that they could turn on her, too.

The Young and the Restless spoilers say Phyllis will think Victor is dangerous and unpredictable. She’ll point out that he could frame one or both of them to save Nikki. Phyllis won’t have much faith in Nick to stop his father. She’ll insist that this situation could head downhill fast.

Despite Sharon’s issues with Nick, she won’t think he’s capable of throwing the mother of his kids behind bars. Phyllis won’t think Sharon should be so sure. She’s also the mother of Nick’s child and she won’t doubt for a second that he would do it. Since Phyllis is actually living with and in a relationship with Nick, that says a lot about where they stand as far as trust goes. In other words, they have none!

Y&R fans can expect Sharon to put up a fight. She’ll think this nightmare has just made Phyllis paranoid. However, it won’t be long until Sharon sees some truth to what Phyllis is saying. She’ll begin to wonder if the Newmans will make them regret this whole cover-up.

The Young and the Restless spoilers say Sharon and Phyllis will form their own secret alliance, which is bound to create more complications. They may be sabotaging themselves here. Nikki and the others could gang up on them out of spite! Even if they don’t, Nick isn’t going to like this one bit. He’s going to feel betrayed from so many angles when the real story comes out.

What else does Phyllis have up her sleeve? Will it lead to the explosive conclusion of the J.T. Hellstrom (Thad Luckinbill) saga? We’ll give you updates as other Y&R news comes in. Stay tuned to the CBS soap and don’t forget to check CDL often for the latest Young and the Restless spoilers, updates, and news.