The Young and the Restless Spoilers: Y&R’s New Faces, Fresh Characters and Recasts Ahead – Mal Young Dishes on Cast Shakeups 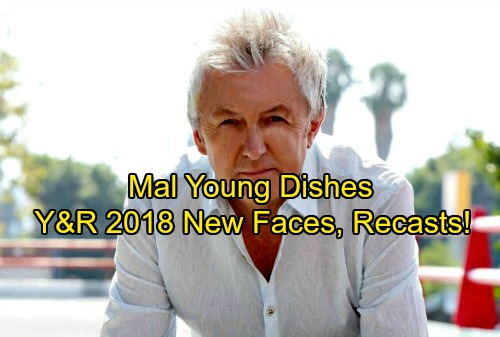 The Young and the Restless (Y&R) spoilers tease that some cast shakeups are on the way. Y&R’s head writer and executive producer, Mal Young, has some fun changes in mind at the CBS soap. In an interview with Soap Opera Digest, Young dished on his plans and offered hints about who might show up.

Young revealed that “there are new faces coming to Genoa City,” so Y&R fans will definitely be anxious to see these arrivals. According to SOD’s insider, the “new faces” will include both fresh characters and recasts. The source insists that Kyle could be first up in the recast department.

That certainly lines up with a recent onscreen clue. Kyle sent his vote via courier during Jack (Peter Bergman) and Ashley’s (Eileen Davidson) recent war. He was the tiebreaker that pushed Jack out as CEO. Jack is now trying to climb his way back to the top, but Kyle’s betrayal could leave him a little bitter.

This could set up some great conflict when Kyle eventually returns to town. The Young and the Restless could deliver some awesome drama here. Plus, Kyle could be paired up with a lucky lady in GC. It’s always nice when Y&R can bring some new romances to the table. Any exciting changes are appreciated.

Speaking of exciting changes, Young intends to rev up the action in 2018. He wants to go bigger and bolder. “We’re not going to rest on our laurels,” Young said. “Just when you think you’ve got things worked out, we’re going to shake things up.”

Young added that they have a motto on their writers’ wall at the studio. “I never saw that coming” is the mantra they repeat and what they hope to make viewers say on a daily basis. We’ll probably get more of those surprises after the inevitable reunions. Y&R watchers can certainly see those coming!

Once all the right couples are together again, Young can throw in some story twists to keep it interesting. Of course, the recast news should make everyone hopeful about Adam’s return. If they’re going to bring back Jack’s son, they need to bring back Victor’s (Eric Braeden) as well! It’s a good idea to round out the Abbott and Newman families with these crucial characters.

Would you like to see Adam return from the dead? What other characters do you want to resurface? The Young and the Restless spoilers say some shockers are looming, so stay tuned. We’ll give you updates as other Y&R details emerge. Stick with the CBS soap and don’t forget to check CDL often for the latest Young and the Restless spoilers, updates and news.

2018 if filled with secrets and surprises starting next week on #YR! pic.twitter.com/PvPfQmku8p