BY Heather Hughes on October 13, 2018 | Comments: one comment
Related : Soap Opera, Spoiler, Television, The Young and the Restless 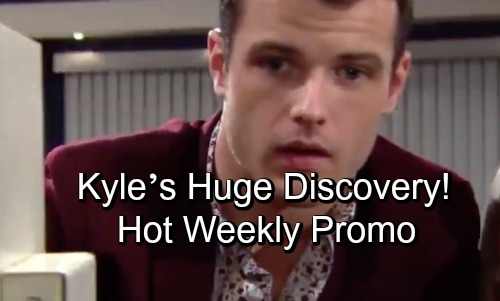 The Young and the Restless (Y&R) spoilers for the week of October 15-19 tease that some shocking moments are on the way. For starters, let’s talk about all the Abbott clan’s chaos. Thanks to Ashley’s (Eileen Davidson) admission, this family will be stuck in turmoil. Jack (Peter Bergman) will hear all the details of how Ashley’s sneaky plan came together. She won’t even be sorry for all the pain she caused!

Ashley will feel like it served Jack right after how he treated her, but the rest of the Abbotts won’t feel the same. In addition to Jack’s rage, we’ll see Abby (Melissa Ordway) throw a fit. She’ll be disgusted with her mother for stooping so low and leaving Jack in such a dark place. Abby won’t like the fact that she was deceived throughout this mess either.

Kyle (Michael Mealor) will lash out at Ashley as well. Even Traci (Beth Maitland) will think Ashley crossed the point of no return. She won’t think Jack can ever forgive Ashley for this. At that point, we might see the first hint of remorse. Let’s hope Ashley can eventually understand that what she did was wrong. It’s the only way she’ll ever have hope for reconciliation.

Other Young and the Restless spoilers say Billy (Jason Thompson) will try to explain. Summer (Hunter King) will be thrilled when she gets summoned to Jabot. She’ll expect Billy to fall into her arms and ask when their next sex session’s going to be. Summer will hope Billy’s feeling all the wonderful things she’s feeling.

Alas, Billy most certainly is NOT. He’ll tell Summer that he’s not interested in a real romance or even another hookup. Billy will hate that he got caught up in the moment and hurt Summer, but this is just how it has to be. Y&R spoilers say Summer will refuse to believe Billy doesn’t want her. She’ll get Billy riled enough to shut her down firmly. It’s just not happening, sweetheart!

As they spar, Phyllis will waltz down the hall. She’ll be within earshot as Billy and Summer discuss their hot night together. Billy won’t deny it when he’s confronted. In fact, he’ll take great pleasure in bringing Phyllis some pain. The Young and the Restless weekly preview video shows Billy saying, “I can’t tell you how sweet it was getting it on with the daughter of the two people who screwed me over.”

Phyllis will give Billy a hard slap and Summer…well, pathetic Summer will just stand there looking like the love of her life dumped her. Over with Kyle (Michael Mealor), he’ll head off in search of a new secret. After Dina (Marla Adams) mentions John’s (Jerry Douglas) safe at Jabot, Kyle will take her to the building. He’ll let Dina show him where it is and they’ll take a look inside together.

The shocker of a lifetime is waiting inside this safe, so Kyle will be in a tight spot soon. He’ll have to decide what to do with this info. Meanwhile, another message will arrive from the cover-up crew’s blackmailer. Since they’ll be dragging their feet on a payment, this man or woman will send a picture of the sculpture at the park. If the ladies don’t pay up, what’s underneath is may be exposed!

Sharon (Sharon Case), Victoria (Amelia Heinle), Nikki (Melody Thomas Scott) and Phyllis will feel like they’ve been backed in a corner. Will they be forced to cough up the money? We’ll give you updates as other Y&R news comes in. Stay tuned to the CBS soap and don’t forget to check CDL often for the latest Young and the Restless spoilers, updates and news.