BY Heather Hughes on October 19, 2019 | Comments: one comment
Related : Soap Opera, Spoiler, Television, The Young and the Restless 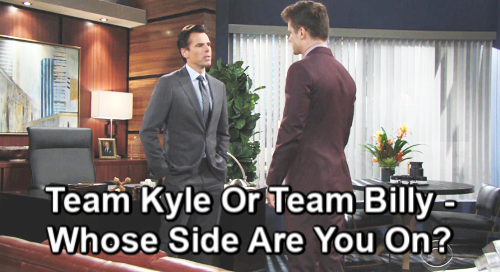 The Young and the Restless (Y&R) spoilers tease that Jabot’s latest battle is about to get vicious. Y&R fans know that Jack Abbott (Peter Bergman) decided to take a step back from the company and focus on his Abbott family history book. He’s putting his heart and soul into this project with Traci Abbott (Beth Maitland), so that just doesn’t leave enough time to handle things at Jabot.

Jack opted to let both Billy Abbott (Jason Thompson) and Kyle Abbott (Michael Mealor) run things in the meantime. Two heads are better than one, and this would be a good arrangement if they could both get over their pride. Unfortunately, power tends to bring tension and cutthroat strategies, so that’s the situation the Abbott men currently find themselves in.

During the week of October 21-25, the conflict will really rev up. Billy has already disrespected Kyle on the job. He’s referred to Kyle as an up-and-comer and called him “kid,” which Kyle wasn’t a fan of at all.

Kyle Abbott Proved Himself When Jack Abbott Left On Retreat

Kyle ran Jabot just fine when Jack took some time off for his retreat. He’s also proven himself on multiple projects and his youth is an asset in some ways. Kyle can bring a new, valuable perspective to Jabot – one that could propel the company to new heights.

Of course, Billy’s experience is valuable as well. He feels like there are parts of this business that Kyle just doesn’t understand and can’t until he gets a few more years under his belt. Billy may be right, but that’s why Jack’s idea was a great one. This should’ve been an opportunity for Billy and Kyle to learn from each other and grow. Instead, it’s becoming a fierce competition that’s about to get truly nasty.

The Young and the Restless spoilers say some sabotage will be afoot soon enough. Kyle will feel like Billy’s just waiting for him to fall on his face. He’ll call Billy out for not wanting him to succeed, and Billy won’t deny it. Billy obviously views this as his time to shine, but Kyle’s tired of being overlooked and pushed aside. He was already planning to make Billy look bad in Jack’s eyes, but he could shift his tactics and go after Billy directly now. This war’s obviously going to spiral out of control.

Whose side are you on here? Are you rooting for Billy or are you “Team Kyle” all the way? No matter who you support, Jack was clear in his wishes. He wanted both Billy and Kyle to fill in for him. Billy’s disregarding Jack’s decision entirely, which is especially ridiculous considering he was out of his mind in a boathouse not too long ago. He’s lucky Jack gave him this chance at all.

The Young and the Restless spoilers say Billy could slip back into a dark place following Adam Newman’s (Mark Grossman) return home. Will that give Kyle the upper hand? Kyle may face a bit of a moral dilemma if he’s forced to choose between helping Billy as his uncle or tanking him as his rival.

It sounds like some exciting scenes are coming up. We’ll give you updates as other Y&R news emerges. Stay tuned to the CBS soap and don’t forget to check CDL often for the latest Young and the Restless spoilers, updates and news.