BY Marcy Cohen on June 28, 2019 | Comments: one comment
Related : Soap Opera, Spoiler, Television, The Young and the Restless 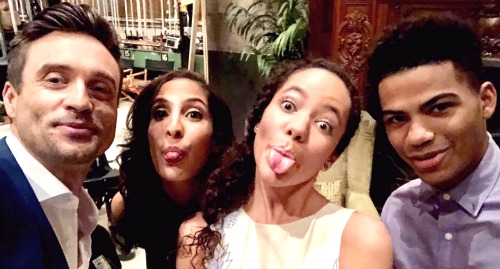 The Young and the Restless (Y&R) spoilers reveal that one CBS soap is facing some backlash over a recent tweet. Y&R fans know Cane Ashby (Daniel Goddard) is finally starting to move on from Lily Ashby (Christel Khalil). He recently shared a kiss with Traci Abbott (Beth Maitland) and plans to throw her a party to celebrate finishing her book.

It’s clear that Cane and Traci have a sweet, deep connection. Of course, viewers disagree on how far their relationship should go. Some feel like these two are better off as supportive pals. Others think it’s giving the actors a new story and ask, “Why not?” It’s certainly been nice to see Traci used more often. It’s also good that Cane didn’t completely fade to the background after his divorce from Lily.

Although Cane and Traci’s chemistry is up for debate, watching Traci’s novel play out was fun and different. It was a refreshing change of pace, which is great since soaps can sometimes fall into the same old patterns. However, some Young and the Restless fans are still longing for “Lane” – and it seems Goddard is, too.

On his Twitter account, Goddard ignored the recent developments with “Trane” and addressed his old soap romance instead. He tweeted and picture of the Ashby family and said, “#retweet IF YOU MISS THIS! #Lane #TheAshbys #yr.” Goddard quickly received replies from fans who disapproved of his timing.

“This seems disrespectful and questionable on a few levels,” one Y&R viewer said. “Rude bud,” said another. “You seem to be a kind and respectful man @DanielGoddard – so why would you tweet this?” asked on more Y&R watcher. “Seems like a swipe at your current co-star, who many of us also love.”

Naturally, Goddard scored plenty of praise for the tweet as well. Fans have different opinions, so there were many pro-“Lane” comments. “I miss you with Lily,” one fan admitted. “I hate what has happened with the storyline. You and Lily belong together!” “We miss the Ashby family,” another viewer tweeted.

The Young and the Restless spoilers say Cane and Traci will navigate some tricky waters in the coming weeks, so we’ll see how things turn out for them. What are your thoughts on Cane’s love life? Do you miss Cane and Lily or are you rooting for Cane and Traci now?