BY hellodrdavis on December 9, 2019 | Comments: one comment
Related : Soap Opera, Spoiler, Television, The Young and the Restless 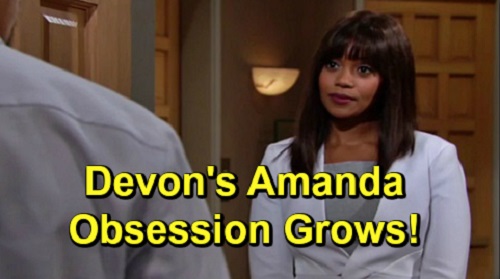 The Young and the Restless spoilers tease that Devon Hamilton (Bryton James) will be feeling determined. As Y&R viewers know, he’s just received a big wakeup call from Elena Dawson (Bryni Sarpy), who strongly suggested that he drop his intense obsession with Amanda Sinclair (Mishael Morgan). Devon denies being attracted to Amanda; rather, he claims to distrust her and want her out of his life and out of Genoa City. But Elena thinks that his obsession with her is unhealthy, and she wants him to put it aside for the sake of their relationship.

Well, it seems that Devon won’t be able to do that, and that’s going to lead to trouble for “Elevon.” In the weekly preview, Devon is shown in yet another tense conversation with Elena, insinuating that perhaps she deserves someone else, so it sure doesn’t look like they are anywhere close to working through their issues. And according to Y&R spoilers, Devon isn’t going to set aside his suspicions about Amanda anytime soon.

In fact, now that Colin Atkinson (Tristan Rogers) is on the run and has Devon’s money hidden somewhere, and Cane Ashby (Daniel Goddard) is off looking for leads, Devon really has no one to lash out at but Amanda. Of course, he has no proof that Amanda had any knowledge of Colin’s big scheme to take his fortune away from him, and in the end, it was 100% Devon’s decision to give away his money.

It seems that the person Devon should really be angry at is himself, but psychologically it’s easier to lash out at Amanda. And soon, Y&R spoilers say that Devon will get a dossier on Amanda from Victor Newman (Eric Braeden), who will have taken it upon himself to do a background check on Amanda, given her close resemblance to Hilary Hamilton (Mishael Morgan). And since the dossier will turn up some inconsistencies on Amanda, it seems that Devon will be even more determined to dig into her past.

Of course, as it’s becoming increasingly clear, Amanda seems to be in Genoa City at least partially to distance herself from someone from her past. She’s been shown in several scenes looking at a tracking app and talking on the phone with someone about how she has a tracker secretly placed on someone whom she refers to as “him.” It’s looking more and more like Amanda may have a stalker that she’s running from.

At any rate, the dossier findings are apparently going to gear up Devon for more of a dive into Amanda’s past – something that’s not going to please Elena at all. Elena wants Devon to distance himself from Amanda and just let the whole thing go, but it doesn’t look like Devon will be able to do that, and this will likely put a big question mark over Devon and Elena’s relationship. Elena’s probably not going to be able to take much more of “obsessed Devon.”

We’ll see what happens here, but it looks like Devon might soon have both women on his bad side soon if he’s not careful. Do you think that Elena and Devon’s relationship will survive? Stay tuned to the CBS soap and don’t forget to check CDL often for the latest Young and the Restless spoilers, updates, and news.