The Young and the Restless Spoilers: Devon’s Hot New Love Triangle – Elena or Amanda, Who Are You Rooting For? 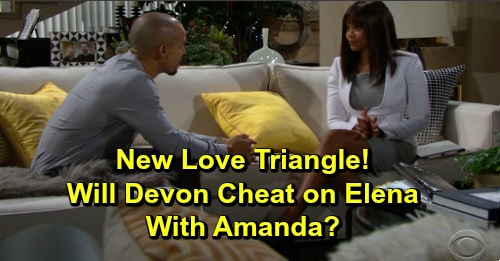 The Young and the Restless (Y&R) spoilers tease that the CBS soap has a dilemma on their hands, but it’s not necessarily bad one! It’s actually a pretty good problem to have since a love triangle seems to be brewing. Let’s set the stage here. Devon Hamilton (Bryton James) was heartbroken when he lost his love, Hilary Hamilton (Mishael Morgan), and “Hevon” fans were heartbroken, too. It was crushing to lose a complex pairing with sizzling chemistry.

Of course, Hilary was a tough act to follow. Many Y&R fans wondered if Y&R could really find another suitable match for Devon, but they arguably did it with Elena Dawson (Brytni Sarpy). “Elevon” has developed quite a fanbase, but they need some angst. That’s where Amanda Sinclair (Mishael Morgan) comes in. She’s the new lawyer who looks exactly like Hilary and has turned Devon’s world upside down.

Some fans are disappointed that Morgan’s not playing Hilary, but it makes sense story-wise. For starters, dead characters have been turning up alive too much lately. We’ve also got Victor Newman’s (Eric Braeden) fake demise going on, so they probably wanted to avoid heading into ridiculous territory. You can only do so many back-from-the-dead stories in a brief window before you jump the shark.

Plus, Hilary’s return wouldn’t serve as true angst for Elena and Devon. It would merely break them up. Devon loves Elena, but they’re not in deep enough for Elena to be true competition for Hilary. He’d drop Elena in a flash if Hilary miraculously resurfaced, so it’s easy to see why they took the lookalike route. This way Devon can be drawn to Amanda while still wanting to remain loyal to Elena.

Devon’s agitated and confused right now, but that could change as he gets to know Amanda a bit. He may find himself wanting to be around her. The fact that Amanda reminds him of Hilary will be difficult to ignore. It could turn into a bit of an obsession and leave Elena deeply concerned.

At the same time, Devon will logically have to realize this isn’t Hilary. He should know he can’t recapture their past by getting together with Amanda. Y&R may also have Amanda drawn to Devon from a sympathetic standpoint. This could be interesting stuff if they play all the right beats and take full advantage of the drama.

That brings us to the problem we mentioned. The “Hevon” fanbase may get behind an Amanda and Devon pairing due to the actors’ chem. The “Elevon” fanbase will remain fiercely passionate as well. The Young and the Restless may not be eager to alienate either group. They’ll also have to make a decision about who Devon will end up with – although they can certainly have him switch it up later.

Devon can’t be with two women at once though, so they’ll have to go with one or the other for a while. Are you rooting for Devon and Elena to stick together? Would you rather see Devon with Hilary instead? The Young and the Restless spoilers say some excitement’s ahead no matter what, so stay tuned. We’ll give you updates as other Y&R news comes in. Stick with the CBS soap and don’t forget to check CDL often for the latest Young and the Restless spoilers, updates and news.