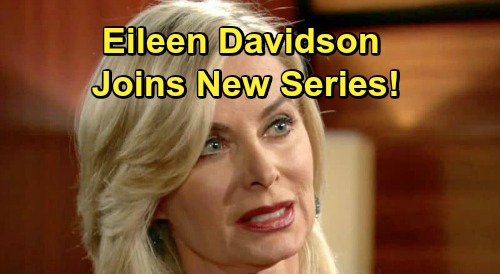 The Young and the Restless (Y&R) spoilers reveal that one CBS soap star has a brand-new series in the works. Y&R fans certainly enjoyed Eileen Davidson’s recent return as Ashley Abbott. She’ll be back for more scenes as well as the Kristoff St. John (Neil Winters) tribute episode later this month. However, viewers can also catch Davidson in an exciting project that’s coming in 2020.

Davidson will portray the role of Jessie Mercer in Secrets & Shame: Dear Oprah Diaries. Oprah Winfrey is set to play herself in this series, which is based on a biography written by James W. Mercer, Ph.D. Mercer will also portray himself along with Christy McGinity Gibel, who’ll appear as a foster parent.

It sounds like they’ve got a great cast lined up, so they should bring some powerful performances. This series is still in development, which means they’ve got a long way to go before it hits the air. Nevertheless, it’s definitely fantastic news for Davidson. Y&R fans always like to see their favorite alums out there scoring new roles and achieving success.

Of course, Davidson has suggested she’s willing to pop in for Young and the Restless stints from time to time. Since Ashley and Jack Abbott (Peter Bergman) are involved in a major war right now, Ash might reappear down the road for the conclusion of it. Perhaps these siblings could truly patch things up eventually.

We’ve also got Dina Mergeron (Marla Adams), who continues to fade. There’ll come a day when Y&R fans will have to say goodbye to Dina, so Ashley will have to say goodbye, too. Davidson would surely be willing to return for Dina’s funeral when the time comes. Dina may have months or even years left, but it’s worth mentioning that Ashley would likely be on hand for that special farewell.

The Young and the Restless spoilers say there’ll be opportunities for Ashley to get back in the mix briefly, but it’s nice to know she’s got this new series coming up. We’ll give you updates as other Y&R details emerge. Stay tuned to the CBS soap and don’t forget to check CDL often for the latest Young and the Restless spoilers, updates, and news.