BY Kinsley Goldman on April 10, 2019 | Comments: one comment
Related : Soap Opera, Spoiler, Television, The Young and the Restless 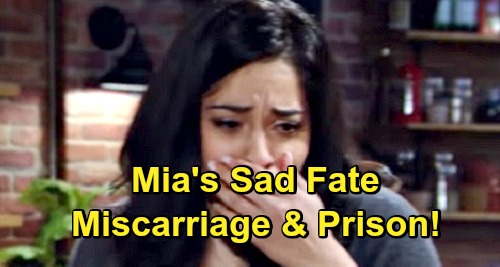 The Young and the Restless (Y&R) spoilers tease that Mia Rosales (Noemi Gonzalez) is headed for full-blown panic mode. Paul Williams (Doug Davidson) could be closing in on the truth about Lola Rosales’ (Sasha Calle) attack – at least he’s trying to with Rey Rosales’ (Jordi Vilasuso) help. What Paul doesn’t know is that Rey’s covering for his soon-to-be ex-wife and maybe “baby mama.”

Mia is safe for now, but she understands how crucial it is for this baby to be Rey’s. Since it most likely isn’t, Mia may have to take drastic action. The Young and the Restless spoilers hint that a paternity swap could be coming up. Mia could easily alter the results to make sure Rey’s the father and not Arturo Rosales (Jason Canela), who’s most likely the real bio dad.

Once Mia takes care of business, she may believe she’s in the clear. However, that just won’t be the case. The Young and the Restless spoilers say Mia’s final episodes will air next month, so her exit will hopefully be satisfying. It’d be a shame if Mia didn’t face justice after being so horrible during her entire Y&R stint.

In Wednesday’s Y&R episode, April 10, Lola hopes her attacker’s caught and thrown in prison for a very long time. That could be a hint about Mia’s outcome. She definitely deserves to be behind bars, but what about the baby? There’s an easy fix for that if Mia resorts to paternity scheming. That’s the kind of secret that always comes out, so Mia would inevitably get busted.

As Mia’s last plan crumbles, the stress of it all could result in a miscarriage. That way Mia can head to the slammer, Arturo can leave town in shame and Rey can battle guilt. Sharon Newman (Sharon Case) would certainly be there for Rey to lean on.

Plus, Mia could stew in prison for a lengthy sentence and plot her revenge. She might be a character that could reenter the picture years down the road. Regardless, The Young and the Restless spoilers say a baby tragedy could be brewing.

Do you think Mia will lose her unborn child? Will she get caught making a paternity switch or will her arrest do the devastating damage? We’ll give you updates as other Y&R news comes in. Stay tuned to the CBS soap and don’t forget to check CDL often for the latest Young and the Restless spoilers, updates, and news.