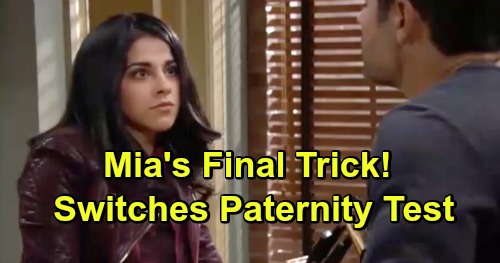 The Young and the Restless (Y&R) spoilers tease that Mia Rosales’ (Noemi Gonzalez) exit from the CBS soap has been confirmed. She’ll still be onscreen for about another month, but Mia is indeed on her way out. Now it’s just a matter of how Mia will be ushered off canvas. Some big clues are emerging thanks to some recent revelations and what we know about how Mia operates.

For starters, Mia learned she’s about 12 weeks along. That fits with the “baby daddy” being Arturo Rosales (Jason Canela). Of course, Mia is either in denial or is just hoping for the best. Despite whatever she might feel for Arturo, Mia knows this baby needs to be Rey’s. She’s got a lot riding on this, including her freedom.

Rey is willing to keep Mia’s secret for now, but what happens if this kid is revealed as Arturo’s? It’s possible Rey would still protect Mia for the baby’s sake. After all, this child would be his niece or nephew.

However, it’s also possible Rey’s rage would take over in that moment. There’s no guarantee he won’t march Mia down to the police station as soon as the truth comes out. Regardless, Y&R spoilers say that’s a risk Mia may not be willing to take.

Besides, Mia is clearly obsessed with winning the men in her life. The only reason she wanted to hook up with Arturo was so Abby Newman (Melissa Ordway) couldn’t have him. Now that Rey is madly in love with Sharon Newman (Sharon Case), The Young and the Restless spoilers say Mia is determined to win him back, too.

The only way Mia has a shot is if the paternity test results back her up, and they probably won’t do it without a little help. Mia could easily pull a paternity switcheroo. She’ll inevitably have a DNA test done soon and the results will likely confirm Arturo as the father.

Naturally, Mia may prove to be her usual resourceful self and bribe the lab tech. If not, maybe Mia could sneak in, get her hands on the results before Rey and alter them herself. Whatever the case, this may be the last straw for her soon-to-be ex-husband! Rey will be furious if Mia makes a swap and dupes him with bogus proof.