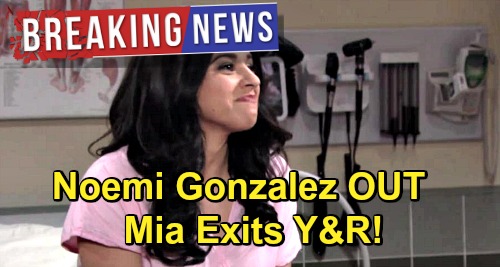 The Young and the Restless spoilers tease that Genoa City is about to lose another Rosales family member. Noemi Gonzalez, who portrays Mia Rosales on the CBS soap, has announced her impending departure. Yes, Noemi Gonzales is out and Mia Rosales will exit Y&R!

Noemi posted a statement on Twitter announcing her exit. “My loves it’s been a pleasure,” she tweeted, along with the following statement: “I have been honored and blessed with the opportunity to embody such a dynamic character on such a special show! This is the hardest working cast/crew/staff in show business, let me tell you! A special thank you to Jordi Vilasuso, Jason Canela, Marisa Garcia, Kathy Jones, and Patricia Denney.”

Her statement continued: “Thank you so much to Sony Pictures Television and CBS for gracing me with the opportunity to be a part of such an iconic show. But most importantly thank you to our loyal fans. Everything I gave was for you and the love of your stories. I’m going to miss Mia Rosales and Genoa City. I will be on the air for another month, but I’m off to shake things up elsewhere! Stay tuned for what’s next!”

Noemi joined The Young and the Restless last year when Mia traveled to Genoa City to try to reconcile with her husband, Rey Rosales (Jordi Vilasuso). They had been estranged for a while, as Mia had had an affair with Rey’s brother, Arturo Rosales (Jason Canela).

For a while, it looked like Mia and Rey had patched things up, and they even renewed their marriage vows. But things took a bad turn when Rey discovered that Mia was responsible for his sister Lola Rosales’ (Sasha Calle) violent physical assault. Then things got worse when it was revealed that Rey was in love with Sharon Newman (Sharon Case), and that Mia had once again slept with Arturo.

Now Mia’s pregnant, and the father could be either Rey or Arturo, so it will be interesting to see how this storyline gets wrapped up to make way for Noemi’s departure from Y&R. Mia could have a miscarriage, which would wrap things up quickly, or it could be discovered that Arturo is the baby’s father and the two could leave Genoa City together.

Of course, it’s always possible that Mia could get carted off to jail for her role in Lola’s attack. It looks like we’ll have to wait and see how all the loose ends are tied up over the next month.

We wish Noemi the best in all of her future endeavors! Stay tuned to the CBS soap and don’t forget to check CDL often for the latest Young and the Restless spoilers, updates, and news.

My loves it’s been a pleasure! 🙏🏽❤️ pic.twitter.com/aCltnBXSRT