The Young and the Restless Spoilers: Noemi Gonzalez Gets a New Job – Y&R Star Takes on Role in Surprising Series 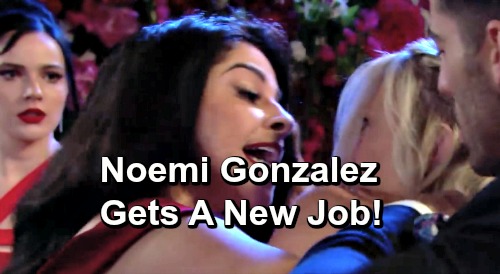 The Young and the Restless (Y&R) spoilers reveal that one CBS soap star is taking on a brand-new role. Y&R fans know Noemi Gonzalez as Genoa City’s resident pot-stirrer, Mia Rosales. She’s been causing chaos from the moment she hit town.

However, Gonzalez has a new job and it involves a show in a completely different genre. Soaps are known for drama that’s heartbreaking, infuriating or humorous depending on the situation. Gonzalez’s latest gig involves a project that’s more about chills and thrills. She’s joined the cast of Dark/Web, a horror anthology series that “explores the dangers of a totally connected world” according to IMDB.

Of course, we should point out that this series is now in post-production. Gonzalez plays “Molly” in three episodes, which have already been filmed. That means this particular role doesn’t affect her current one on The Young and the Restless.

Still, we have to wonder when the inevitable cast cuts are coming at Y&R. There are bound to be some thanks to Mal Young’s departure as the show’s head writer and executive producer. Will Mia be one of the characters who’s written out?

Mia fantasized about cutting a chunk of Abby Newman’s (Melissa Ordway) hair off not too long ago. She’ll end up physically attacking Abby later this week. Y&R seems to be taking this character off the deep end, so it’s reasonable to assume Mia will be phased out. That’s especially true since Rey Rosales (Jordi Vilasuso) really wants Sharon Newman (Sharon Case). Mia has always just been an obstacle.

Brytni Sarpy (Valerie on General Hospital) has joined the cast of Y&R in a new contract role. She’ll be playing Elena Dawson soon enough. The Young and the Restless spoilers say the show’s also searching for a new Adam Newman. With the news of these additions, departures have to be brewing, too. The money to pay newbies has to come from somewhere!

Whether Mia is headed for the exit door or not, don’t be surprised if some cast members indeed hit the road. On the bright side, Gonazlez’s new project certainly looks interesting. It’s set to be released in 2019, so be sure to check it out if you like horror and technology scares.