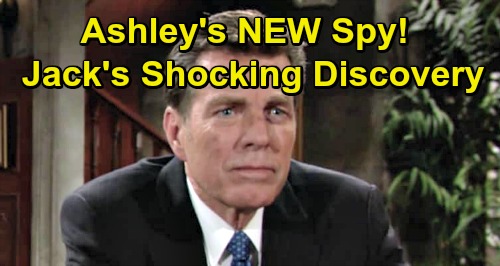 The Young and the Restless (Y&R) spoilers tease that Jack Abbott (Peter Bergman) will focus on his goal. He knows Ashley Abbott’s (Eileen Davidson) latest blow hit Jabot hard, so he just has to keep the company afloat. Jack refuses to accept that it’s Ashley’s way or the highway. He also won’t accept the destruction of Jabot, so success is the only option in his mind.

Despite Ashley’s latest round of drama, Jack will be somewhat relieved to know what he’s up against. During the week of April 8-12, Jack will feel like everything’s out in the open now. He’ll believe he can just concentrate on his new plan to compete with Ashley and have a fair fight. However, Jack should know by now that Ashley doesn’t do fair anymore! She’s always got a trick or two up her sleeve.

The Young and the Restless spoilers say Jabot will once again face a tough blow. Billy Abbott (Jason Thompson) will deliver news that leaves Jack in shock this week. It turns out My Beauty is rolling out a strategy that’s pretty much identical to Jabot’s new one. Just like Jack, Ashley will also be branching out with a new apparel and lifestyle line.

Naturally, Jack will feel like another employee must be a plant from Ashley. He’ll be on a mission to find the mole that’s leaking info to his sister.

Billy, Kyle Abbott (Michael Mealor) and even Summer Abbott (Hunter King) will all be suspects. Jack will try to remain calm about all this, but he’ll at least have to ask. Even if they didn’t intentionally do it, Jack will know sloppiness can lead to trouble.

When Jack finally realizes who’s behind the chaos, he’s in for another big surprise. Y&R spoilers say Jack himself is the leak – at least in a way. Remember that gift basket Ashley sent to rub her victory in Jack’s face?

Well, that wasn’t just meant to taunt her brother. Ashley put a listening device inside, so she’s heard all of Jack’s tactics and has been putting them to good use.