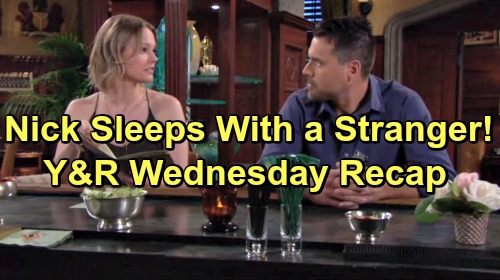 The Young and the Restless (Y&R) spoilers update and recap for Wednesday, April 10, tease that Victoria Newman (Amelia Heinle) will form a plan. She’ll get a reminder from Brandon Rose (Mitch Eakins) about the high-stakes poker game, but Billy Abbott (Jason Thompson) won’t think she should attend. Victoria will determine it’d be easier to just bring the game up to her room instead, so that’s exactly what she’ll do.

Billy’s old poker rival, Sinead (Lira Kellerman), will pop up to play. After Billy points out he’s not joining in, Sinead will decide to go after Victoria’s trust fund. The Young and the Restless spoilers say Victoria’s hand will be the winner, so Sinead will be out of luck. Unfortunately, Victoria won’t accomplish what she set out to do. The guy she really wanted to see will be a no-show. 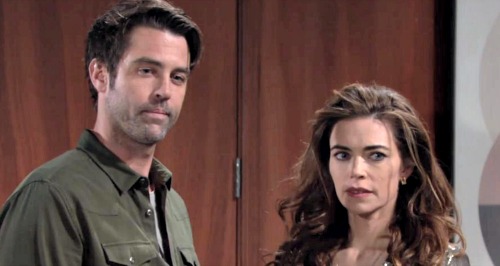 Victor Newman (Eric Braeden) has been having secret meetings with a man known as “Spider,” so Victoria will remain curious. However, she’ll ultimately shift gears after the gathering breaks up. Victoria will share another kiss with Billy, but she’ll let him know she has to take things slow.

Back in Genoa City, Nick Newman (Joshua Morrow) will disapprove of Victor’s latest trip. He won’t get why Victor had to leave Nikki Newman (Melody Thomas Scott), who just got off the hook. Nikki and Nick will also discuss Phyllis Summers’ (Gina Tognoni) getaway with Summer Abbott (Hunter King). He’ll insist he’s not getting back together with Phyllis, so Nikki will suggest he should check out a dating app.

Later, Nikki will leave Victor a voicemail while Kyle Abbott (Michael Mealor) chats with Lola Rosales (Sasha Calle). After Kyle mentions that Summer’s out of town, Lola will push for a meeting. They’ll settle on dinner at the athletic club later so they can talk. Meanwhile, Phyllis’ spy will take pics of the exes in the distance. 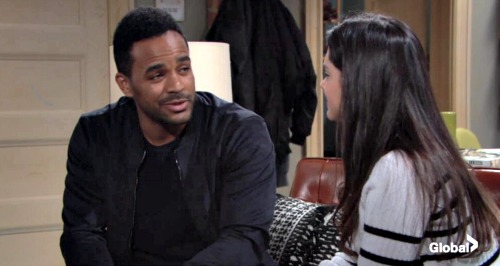 At Rey’s place, Lola will get examined by Dr. Nate Hastings (Sean Dominic). He won’t want Lola to overdo it at the new restaurant, but he’ll clear her to work. The conversation will shift to the attack Lola faced, so she’ll point out that she wants the culprit to land behind bars.

Afterward, Lola will get dressed up for her dinner with Kyle. She’ll want to be honest with each other, so they’ll admit they’re still in love. Lola will contend that she wouldn’t have sex with Kyle before because she kept expecting something to ruin their romance. They’ll reflect on how they got to this point before Lola suggests getting a room and seeing what they could be together. The picture-snapper will keep at it nearby.

Back with Nick, he picks up a chick named Sarah by the bar. Y&R spoilers state that Sarah will head home with Nick, so he’ll have another hot hookup. Over with Jack Abbott (Peter Bergman), he’ll fill Billy in on the apparent Jabot leak by phone. Jack will also mention it to Kyle and wonder if Summer had anything to do with it.

Kyle will insist that Summer’s hands are clean, but Jack will still want the truth. He’ll ultimately realize Ashley Abbott (Eileen Davidson) planted a listening device in the gift basket she sent. It sounds like Jack will have to step up his efforts if he wants to compete with Ashley!