The Young and the Restless Spoilers: Arturo and Rey Shocking Deal, Brothers Take Stand Against Mia – Manipulative Mom Goes Down

BY Marcy Cohen on April 9, 2019 | Comments: one comment
Related : Soap Opera, Spoiler, Television, The Young and the Restless 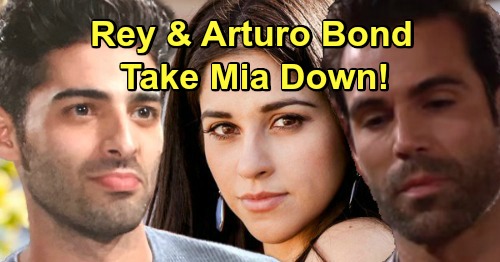 The Young and the Restless (Y&R) spoilers tease that Arturo Rosales (Jason Canela) will make a shocking deal with Rey Rosales (Jordi Vilasuso). These brothers obviously aren’t on great terms since the truth about Mia Rosales’ (Noemi Gonzalez) night with Arturo came out. Rey was furious to learn Mia and Arturo had once again betrayed him.

However, it looks like Arturo and Rey will call a truce – at least when it comes to the Rosales baby that’s on the way. The Young and the Restless spoilers say they may agree about protecting this little one. It’s not the kid’s fault that he or she has a rotten, manipulative mother. Arturo and Rey might determine that they have to give this child the best shot they can.

There’s no word yet on the details of this deal, but it makes sense for it to center around the baby. Rey has vowed keep quiet about Mia’s attack, but he also makes Arturo her alibi in Tuesday’s episode, April 9. He’ll need Arturo’s cooperation here, so he may have to explain the truth behind Lola Rosales’ (Sasha Calle) attack and hope that they’re on the same page.

Of course, this could lead Rey and Arturo to band together against Mia. This woman obviously isn’t cut out to be a mother. She’s already using her kid as a pawn in a dangerous game. Arturo and Rey might determine that as soon as the baby’s born, they’ll take Mia down. They may see that no matter which brother the father turns out to be, this child would be better off without Mia around.

Since Mia’s on-air departure is coming up next month, Rey and also departing Arturo wouldn’t have time to see a plan like this through to the end. Still, they could certainly make that plan and set Mia up for major trouble. Y&R could just let that trouble play out sooner than the Rosales family anticipates!