The Young and the Restless Spoilers: Elena Secretly Wants Nate – Jealous of Amanda’s Growing Relationship With The Doctor

BY hellodrdavis on December 1, 2019 | Comments: 3 comments
Related : Soap Opera, Spoiler, Television, The Young and the Restless 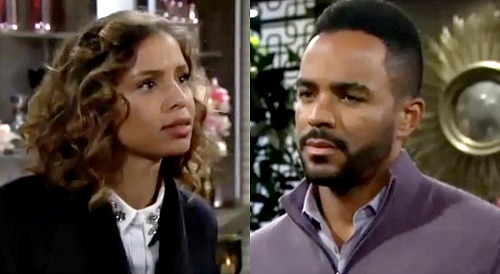 The Young and the Restless spoilers tease that Elena Dawson (Brytni Sarpy) will soon be on the warpath. As Y&R viewers know, she hasn’t been a fan of Amanda Sinclair’s (Mishael Morgan) from the moment Amanda stepped into Genoa City. She’s under the belief that Amanda was part of the con perpetrated by Colin Atkinson (Tristan Rogers), or at least that Amanda knew that something wasn’t on the up-and-up when it came to the dispute over Katherine Chancellor’s (Jeanne Cooper) will.

It remains to be seen whether Elena is right about Amanda’s involvement with Colin, but Amanda has repeatedly professed her innocence in the matter. Still, Elena does not appreciate Amanda’s continued presence in Genoa City, and she’s stated openly on several occasions that she wishes Amanda would go back to where she came from.

But it doesn’t seem that Amanda’s planning on going anywhere. In fact, Y&R spoilers indicate that she’ll decide to stay in Genoa City, and that she’s wrapped up her practice in Madison and is looking to make a new start. That’s something that will make Nate Hastings (Sean Dominic) quite happy, but it’s going to really rub Elena the wrong way.

Of course, the impetus for Elena’s dislike of Amanda was her striking resemblance to Hilary Hamilton (Mishael Morgan), and how that was used by Colin (and whoever else may have been involved in his con) to rattle Devon Hamilton (Bryton James). Elena really feels for Devon, because she knows it’s painful for him to be reminded of losing Hilary all the time. But is there more to Elena’s dislike of Amanda?

We think there’s a good chance that something else is underlying Elena’s deep animosity for Amanda, and it could be her feelings for Nate. Elena and Nate have been close in the past – they’re good friends and they work together and have each other’s backs. But could Elena have developed feelings for Nate that go beyond friendship?

It certainly seems like she might have. At the Crimson Lights Thanksgiving event, Elena was quite unhappy to see Amanda and Nate cozying up and enjoying each other’s company. Sure, a part of that was because she wants Elena gone and out of Devon’s orbit, but could another part of it be that she was feeling jealous of Amanda’s connection with Nate? Elena’s reaction sure seemed to be motivated by jealousy.

And on an upcoming episode of Y&R, Elena will seriously lash out at Nate for keeping company with Amanda, and she’ll almost act like a jealous ex when she confronts him. Her reaction will just seem out of proportion to the situation and completely inappropriate since Nate is a grown man and can make his own decisions about whom he sees.

We’ll see if Elena continues to exhibit jealous behavior when it comes to Nate and Amanda, but our guess is that she probably will. She may have repressed feelings for Nate, and one wonders if Devon will ever pick up on it and wonder what’s going on.

Of course, at this point it is unclear whether Elena’s right and Amanda was involved in Colin’s scam. It’s always possible that Elena will be proven to be right down the line – you never know. Do you think that her strong dislike of Amanda is due to some underlying feelings that she has for Nate? Stay tuned to the CBS soap and don’t forget to check CDL often for the latest Young and the Restless spoilers, updates, and news.