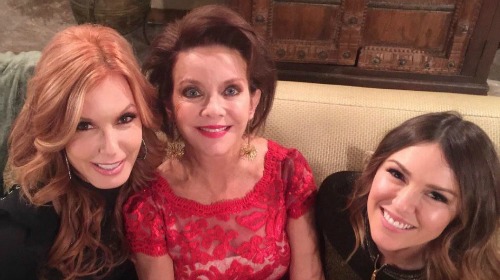 The Young and the Restless (Y&R) spoilers reveal that one CBS soap star is hoping for a costar’s return. On Twitter, Elizabeth Hendrickson (Chloe Mitchell) recently replied to a fan’s tweet about Chloe and Gloria Bardwell (Judith Chapman). The fan posted a video of the pair in an old scene and commented on hilarious it was. That led Hendrickson to pipe up about how much she misses working with Chapman.

“How I miss Gloria @real_jchapman and giving her a hard time,” Hendrickson tweeted. She’d clearly like to see Gloria head back to Genoa City – and many fans would agree! Gloria’s antics and biting comments always added some fun to the show.

It’d be great to see Gloria get back to work as a Jabot assistant or even start a brand-new gig elsewhere. There’s surely some other work to be done at the Grand Phoenix! That place faces crisis after crisis, so they need all the help they can get.

Even if Gloria just popped up briefly, her visit would be a welcome one. Kevin Fisher (Greg Rikaart) is living in GC with Bella Fisher (Martie Blair), so this is the perfect time for a family reunion. Gloria could spend some time with her granddaughter as well as both her sons, Kevin and Michael Baldwin (Christian LeBlanc).

Of course, Gloria might butt heads with Chloe! After all, Kevin lied about Chloe’s faked death and was harboring a fugitive until Michael got them off the hook. That’s certainly something Gloria would want to weigh in on. It’s easy to imagine some fun confrontations resulting from Chloe’s crazy criminal past.

The Young and the Restless spoilers say Zach Tinker will reprise his role as Fenmore “Fen” Baldwin for the holidays. Although it doesn’t look like Gloria will be around for her grandson’s return, we at least know Y&R’s willing to bring other characters back in the mix. Perhaps Gloria will be next on Michael’s list of visitors in town.

How I miss Gloria @real_jchapman and giving her a hard time. https://t.co/ZpJYII3Rsv