BY hellodrdavis on November 18, 2019 | Comments: 2 comments
Related : Soap Opera, Spoiler, Television, The Young and the Restless 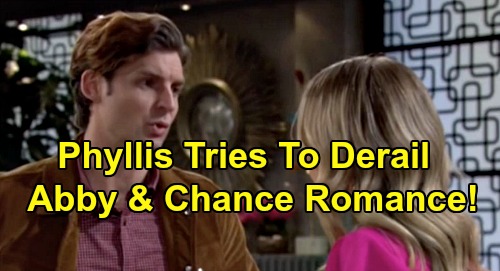 The Young and the Restless spoilers tease that Phyllis Summers (Michelle Stafford) is onto something big. As Y&R viewers know, she recently followed Chance Chancellor (Donny Boaz) to Adam Newman’s (Mark Grossman) penthouse, where she proceeded to needle them about their association. Phyllis knows that the two of them share some big secret from their time together in Las Vegas.

Of course, Phyllis has no idea what their secret is, and neither do Y&R viewers, but it seems like it must be something big. Chance is a law enforcement officer, so if there’s something under-the-table or illegal that he and Adam were involved in, then it’s definitely something that Chance will want to keep under wraps. One thing’s for sure, and that’s that Chance is worried about the truth coming out.

And he’s probably right to be worried. After all, when Phyllis gets something in her head, she tends to pursue it until she gets answers. And that makes us wonder how this secret could blow up Chance’s life. Obviously, if the secret is something that could jeopardize his career as Federal agent, then it must be pretty big. And given that Adam is involved, it is probably something that his family – which includes Abby Newman (Melissa Ordway) – probably wouldn’t approve of.

And that’s something that Phyllis will probably be all too aware of. It seems like TPTB are setting up a possible Phyllis/Chance romance for down the line, yet for the moment Chance seems to only have eyes for Abby. Of course, Phyllis completely enjoys antagonizing Abby and would probably love to take a man from her, and she could get her opportunity to do just that depending on what she finds out about Chance’s Las Vegas dealings.

For example, what if Phyllis finds out something pretty awful about Chance, or something particularly shocking? She could always manage to arrange for Abby to find out about it, to ruin Chance’s relationship with Abby just as it is getting off the ground. Abby generally doesn’t approve of Adam and his ways, so she’d probably be dismayed to find out that Chance was in cahoots with Adam on some big deal.

At any rate, cleverly dropping some negative information about Chance on Abby sounds just like something that Phyllis would do in order to pave the way for a relationship of her own with Chance. And Phyllis seems to like Chance, so we just might see her deliberately sabotage his chances with Abby for her own gain.

What do you think Chance and Adam’s big Las Vegas secret is? Stay tuned to the CBS soap and don’t forget to check CDL often for the latest Young and the Restless spoilers, updates, and news.