The Young and the Restless Spoilers: Tuesday, November 19 – Victor Falls on His Sword, Amanda Battles for Nate – Phyllis the Super Sleuth 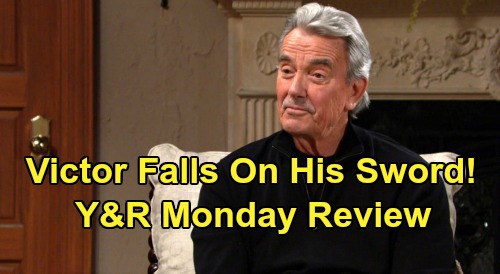 The Young and the Restless (Y&R) spoilers for Tuesday, November 19, tease that Phyllis Summers (Michelle Stafford) will use those sleuthing skills of hers. She’s always juggling a few agendas, but her main goal right now seems to be taking back full ownership of the Grand Phoenix. Phyllis feels like something connects Chelsea Lawson (Melissa Claire Egan), Phillip “Chance” Chancellor (Donny Boaz) and Simon Black (Jeffrey Vincent Parise). She just doesn’t know what the missing link is. Y&R fans should be aware that the show could be preempted Tuesday for impeachment hearings.

Of course, Phyllis may not be on exactly the right track, but she’ll try to get somewhere anyway. The real scoop is whatever went down in Vegas between Chance and Adam Newman (Mark Grossman). Chance warned Adam about making sure Phyllis was handled, but since when does anyone handle Phyllis? She’ll prove she’s a threat when she continues to poke around on Tuesday.

It’s doubtful Phyllis will get solid answers, but she could get a clue or two. Anything helps since Phyllis is determined to solve the Chance-Chelsea-Simon mystery. She’s been curious about all things Chance since she saw him in Sin City with Adam, so they’ll remain on each other’s radar.

Y&R spoilers say Chance will make Abby Newman (Melissa Ordway) an offer this week. Could it have something to do with spying on Phyllis and helping him keep her in line? That’s one possibility to consider. It would certainly be a mutually beneficial arrangement since Abby’s wary of her Grand Phoenix partner.

However, it’s also possible Chance’s offer will be a personal one. He appears quite interested in Abby, so we’ll see what he has in mind. Next, The Young and the Restless spoilers say Amanda Sinclair (Mishael Morgan) will prepare to fight hard for her client. She’s proud to have never lost a case, but can she keep her perfect record intact? Amanda will have her work cut out for her as she helps Nate Hastings (Sean Dominic) fight for his medical license.

Victor Newman (Eric Braeden) will play a crucial role in Nate’s upcoming hearing, so Nate’s got some backup. It’s the least Victor can do after dragging Nate into this mess! Victor will fall on his sword for Nate’s sake and express gratitude for the doc’s help.