The Young and the Restless Spoilers: Y&R Preemption Schedule Week of November 18 – What to Expect 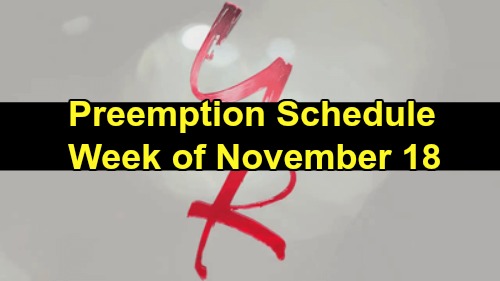 The Young and the Restless (Y&R) spoilers reveal that impeachment hearings coverage will continue, so let’s look at what that means for Y&R during the week of November 18-22. We’ve got a preemption schedule for you so you can be prepared for what’s happening each day. The CBS soap will eventually make official announcements, but it’s a good idea to get a heads-up here.

First, let’s talk about Monday, November 18. Since there are no hearings that day, Y&R will air a brand-new episode. In fact, The Young and the Restless spoilers say it’ll be an action-packed one! Devon Hamilton (Bryton James) will fume over what he believes to be a serious scam. Meanwhile, Billy Abbott (Jason Thompson) takes a closer look at why he’s so hard on Kyle Abbott (Michael Mealor). As for Adam Newman (Mark Grossman) he’ll get useful advice from a caring Sharon Newman (Sharon Case).

On Tuesday, November 19, there could be a break from the drama. Impeachment hearing coverage will be back with testimony in the morning and in the afternoon. It seems likely The Young and the Restless will be preempted as a result, which means the episode may be saved for later.

As for Wednesday, November 20, that day will also bring testimony in the morning and afternoon. Y&R may choose to hold back their latest episode once again, so keep that in mind. There’s no way to be sure until the execs make the official call, but just know that the schedule could indeed be affected on Wednesday

That brings us to Thursday, November 21. Since there’s only going to be one round of testimony, it’s possible The Young and the Restless will still air. It all depends on when coverage wraps up. It’s even possible Y&R will air a partial episode and put the full episode online, so we’ll just have to see what they decide.

Most of us look forward to the end of the work week, and we’ll have a nice way to kick off the weekend on Friday, November 22. That’s because Y&R will return with another exciting new episode. The Young and the Restless spoilers say there are more shockers to come in Genoa City, so stay tuned. We’ll give you updates as other Y&R news emerges. Stick with the CBS soap and don’t forget to check CDL often for the latest Young and the Restless spoilers, updates and news.