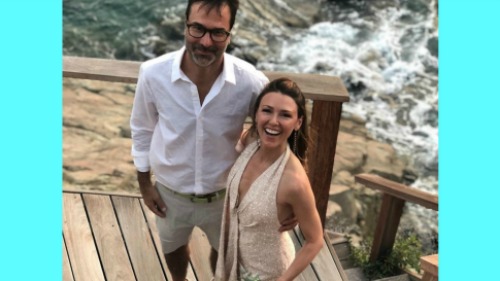 The Young and the Restless spoilers has some great wedding and marriage news to pass on about a popular Y&R star. Elizabeth Hendrickson, who currently portrays Chloe Mitchell on the CBS soap and just wrapped her stint as Margaux Dawson on General Hospital, recently got married.

Elizabeth shared the great news with her friends and family on her Instagram feed. She posted a photo of herself and her new husband smiling big at their wedding ceremony along with the following caption: “Surprise!!!! Cats out the bag! It’s official Mr and Mrs Meder !!! I love you babe, forever and ever.”

Elizabeth married Rob Meder in Gustavia, which is the capital of the island of Saint Barthelemy. Later, she posted some additional photos of herself, Rob, and the wedding party. The wedding looks like it was a casual, beautiful affair.

Elizabeth wore a gorgeous beige sleeveless dress, and the groom looked casual and cool. It appears that the ceremony took place right alongside the ocean, and the wedding party looks happy and festive in the photos.

Elizabeth’s co-stars from Y&R and GH have been steadily responding to her announcement. Greg Rikaart, who plays Elizabeth’s on-screen husband Kevin Fisher on Y&R, promptly liked both posts. And Steve Burton (Jason Morgan, GH) replied with, “Congrats! Wishing you guys the best.”

And Alicia Minshew, who co-starred on All My Children with Elizabeth several years ago, weighed in on the great news. She replied to Elizabeth’s announcement with: “Beautiful!! Congrats sweet Lizzy!!”

Our congratulations go out to Elizabeth and Rob. We wish them all the best! Stay tuned to the CBS soap and don’t forget to check CDL often for the latest Young and the Restless spoilers, updates, and news.

Surprise!!!! Cats out the bag! It’s official Mr and Mrs Meder !!! I love you babe, forever and ever.