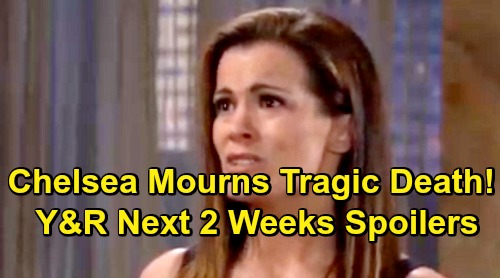 The Young and the Restless (Y&R) spoilers for the next two weeks tease that the action will heat up in Genoa City. During the week of July 1-5, Adam Newman (Mark Grossman) will face disappointment. Chelsea Newman (Melissa Claire Egan) will refuse to accept Adam’s love and turn back the clock. She’ll insist that she’s found a new life and urge Adam to find a new path as well.

Chelsea will also argue that Connor Newman (Gunner and Ryder Gadbois) will never know he’s a Newman. She won’t want her son sucked back into that dark world, but Adam isn’t going to let this go. He’ll plan to do some fighting, but he’ll have to lick his wounds a bit first.

Other Young and the Restless spoilers say Chelsea’s husband, Calvin Boudreau (John Burke), will appear and cause quite a stir. His sudden health woes will force him to be rushed to the hospital and Y&R buzz says things don’t look good for Mr. Boudreau.

Y&R fans can expect a fun carnival for Independence Day this year. Devon and Elena will take in the scene along with several other characters looking for a good time. Ana Hamilton (Loren Lott), Kevin Fisher (Greg Rikaart), Mariah Copeland (Camryn Grimes) and Tessa Porter (Cait Fairbanks) will all join the fun. Victor Newman (Eric Braeden) will make sure many Newman family members show up as well.

Kyle Abbott (Michael Mealor) will meet Celeste Rosales (Eva LaRue) this week, so he’ll hope his first impression is a good one. He won’t want to get off on the wrong foot, so let’s hope all goes well! Lola Rosales (Sasha Calle) will certainly have faith in her devoted fiancé.

Victoria Newman (Amelia Heinle) will attend that carnival we mentioned with Billy Abbott (Jason Thompson), but she’ll also take some time to focus on revenge. Adam will certainly be a target, but don’t forget about Phyllis! She’ll have a fierce faceoff with Victoria, so expect plenty of insults to be tossed around. Both Phyllis and Adam will need to watch their backs because Victoria’s coming for them!

During the week of July 8-12, Phyllis will get grilled by Paul Williams (Doug Davidson). He may note that Summer Newman (Hunter King) was awfully worried about her when she went MIA. Paul may suspect Phyllis isn’t telling the whole story, which is true. She’ll be in the loop on kidnapper Kevin by then, but she’ll probably keep a tight lid on that and the reason for her trip to Vegas.

Back with Adam, he’ll work hard to win Chelsea over. Adam’s timing will be bad in some ways and good in others since Chelsea will be in mourning. It sounds like Chelsea’s husband will die from his earlier medical episode. Part of Chelsea may want to lean on Adam and another part of her may need to process the loss first.

Over with Billy, he’ll face an interrogation about Victor’s health. Jack Abbott (Peter Bergman) will feel like Victor isn’t doing the greatest, so he’ll want Billy to divulge what he knows. Finally, Jill Atkinson (Jess Walton) will return to Genoa City. She’ll cram some interesting encounters into this visit, so stay tuned.