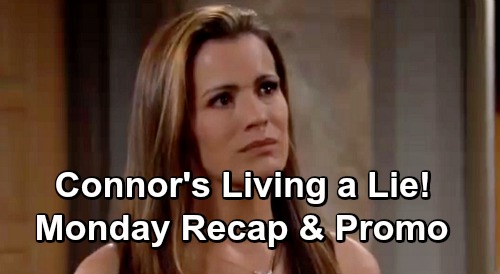 The Young and the Restless (Y&R) spoilers recap and promo for Monday, July 1, tease that Adam Newman (Mark Grossman) will demand some privacy. He’ll want to be alone with Chelsea Newman (Melissa Claire Egan), so he’ll push Nick Newman (Joshua Morrow) to get lost. An irate Nick will refuse to Chelsea on her own with Adam, but she’ll let Nick know it’s what she wants, too.

Once Nick’s gone, Adam will give Chelsea a kiss and suggest that he’d almost given up on her. He’ll invite Chelsea to come home with him, so they’ll head back to the penthouse. Chelsea will answer some questions about Connor Newman (Gunner and Ryder Gadbois), who’s at camp. However, she’ll ultimately contend that she only came back to convince Adam to let her go.

Adam will protest, but Chelsea will believe their forever ended when Adam “died.” He’ll still think they can have a happy ending, but Chelsea will want to keep moving forward. When Adam asks if Chelsea’s in love with her husband, she won’t think she has to answer that. Since Calvin Boudreau (John Burke) is raising Connor, Adam will feel like he deserves some to know the real situation.

Chelsea will point out that Connor needs stability and argue that Adam won’t rock the boat if he cares about his son. The Young and the Restless spoilers say Adam won’t like the idea of Connor living a lie. He’ll suggest that Connor will blame Chelsea for hiding the truth one day, but Chelsea won’t ever want Connor to know he’s a Newman.

Adam will vow to get his son back. He’ll push Chelsea to accept that she loves him without fear or judgment, but she won’t think that’s true anymore. Chelsea will eventually walk out on Adam, so he’ll be pretty rattled over their encounter.

Other Y&R spoilers say Phyllis Summers (Michelle Stafford) will make a shocking discovery. She’ll ask for Kevin Fisher’s (Greg Rikaart) help with a computer issue at Society, but she’ll end up grabbing him by the neck once she smells his cologne. Phyllis will recognize the smell of her kidnapper, but Kevin will argue that it’s a popular fragrance. She’ll let him know she’s not done with him yet.

Next, Nick will run into Phyllis and complain about the last time Chelsea was in town. He’ll feel like he’d be married to Chelsea right now if it hadn’t been for Phyllis. The Young and the Restless spoilers say Phyllis will think Adam and Chelsea’s reunion was inevitable. She won’t understand why Nick’s so quick to defend Chelsea since she’s a liar and a thief.

At the coffeehouse, Mariah Copeland (Camryn Grimes) will be surprised to see Kevin. She’ll mention her new job as head of Power Communications and get the scoop on Bella Fisher (Cali May Kinder) in Oregon. Kevin will naturally leave out all the Chloe Mitchell (Elizabeth Hendrickson) drama, but he’ll confess he’s on quite a few people’s bad side.

Mariah will suggest Kevin should regain control of the narrative. She’ll hope Kevin can turn things around. Over with Devon Hamilton (Bryton James), he’ll talk to Ana Hamilton (Loren Lott) and Elena Dawson (Brytni Sarpy) about some Hilary Hamilton (Mishael Morgan) memories. They’ll listen to his story, and he’ll be grateful for their support.

The Young and the Restless spoilers say Devon will have some poignant Hilary flashbacks before he hugs Elena and Ana. He’ll plan to donate some of Hilary’s things to charity and kiss Elena for bringing him out of the darkness. It sounds like Devon is on a true path to healing, so let’s hope “Elevon” can get back on track.