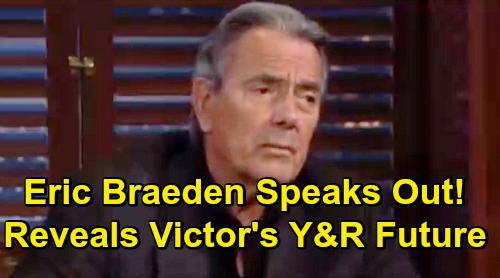 The Young and the Restless (Y&R) spoilers tease that Victor Newman (Eric Braeden) will continue to face a tough battle. He’s got a rare blood disease that’s taking a lot out of him, but he’s keeping hope alive with the help of his supportive family. Victor’s also trying an experimental protocol, which could save his life and bring some difficult side effects in the process.

Since Victor’s facing such a terrible health crisis, many Y&R fans have been concerned about The Moustache’s future. There are always fearful viewers when medical scares come along. People don’t want to lose their favorites, especially not soap staples like the great Victor Newman. It’s easy for some Young and the Restless watchers to fret, even when there’s no need to.

That’s probably why Eric Braeden decided to set the record straight on Twitter recently. He engages with his fans frequently, so he saw some messages from viewers who believed he was on his way out. Thankfully, Braeden promised that’s not the case. A fan interaction proves Braeden intends to stick around and keep entertaining us in Genoa City.

One Y&R watcher started the exchange by tweeting, “I’m gonna miss victor when he leaves the show …” Braeden sent he a firm and clear reply. He said, “No intention of leaving !!” It’s nice to get confirmation as we head into the roughest part of Victor’s declining health storyline.

Since it doesn’t seem likely that The Young and the Restless would fire Braeden and kill him off, Braeden’s tweet also serves as a story leak. He has no plans to leave, so that lets us know everything will work out just fine for Victor in the end. A miraculous recovery is looming, so fans can just sit back and enjoy the show without fear.

Of course, there’ll still be plenty of gripping drama to appreciate. The Young and the Restless spoilers say Victor will rely on Nikki Newman (Melody Thomas Scott) as he faces new challenges. His deteriorating mental state may be hard to hide, but Nikki will do her best and give Victor all the love he needs.

Are you glad Eric Braeden is sticking around? How do you feel about Victor’s current story? We’ll give you updates as other Y&R news comes in. Stay tuned to the CBS soap and don’t forget to check CDL often for the latest Young and the Restless spoilers, updates and news.

No intention of leaving !!