The Young and the Restless Spoilers: Eric Braeden Speaks Out on Victor’s Death Shocker – Reveals True Status at Y&R 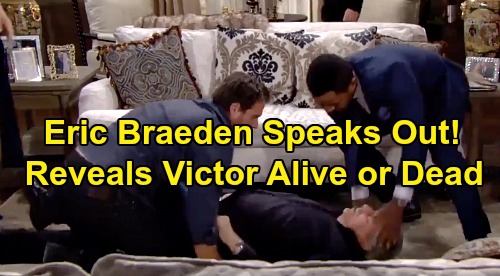 The Young and the Restless (Y&R) spoilers tease that Victor Newman’s (Eric Braeden) death will leave all of Genoa City in shock. As Adam Newman (Mark Grossman) has mentioned, Victor is seemingly invincible. No one in GC expected this kind of blow, so it’ll leave many of the town’s residents with some reflecting to do. Everyone will struggle to believe Victor is really gone.

Of course, Victor is indeed gone – he’s just not dead! Some longtime Y&R fans are freaking out at the thought of losing this beloved character, but there’s no need to panic. We all know things are often not as they seem on the CBS soap. This is actually a sneaky scheme that’ll bring an explosive payoff in the end.

If you’re still in doubt and in need of reassurance, look no further than the words of Victor’s portrayer himself. Eric Braeden recently took to Twitter and attempted to quiet his fans’ concerns. When one viewer threatened to quit watching along with his wife, Braeden made it clear that he wasn’t going anywhere. He tweeted, “No intention of leaving!!!”

Although he couldn’t give any details on this wild plan that’s in motion, Braeden did confirm that some intriguing material’s in store. He said, “Keep watching!! Gets interesting!” In fact, “just keep watching” was the theme of several replies following the airing of Victor’s death episode in Canada. The Young and the Restless spoilers say you can catch that episode in the U.S. on Monday, September 16.

Braeden even corrected a fan who argued that he’s left the show many times to pursue other projects and always comes back. It’s true that Braeden’s taken extended hiatuses, but he’s never formally stepped away according to his comment. He tweeted, “I have actually never left, just for the record!”

Braeden isn’t leaving this time either, so keep that in mind as you watch the somber scenes during the week of September 16-20. There’s light at the end of the tunnel! The Young and the Restless fans just have to be patient and enjoy the bumpy ride. We’ll give you updates as other Y&R news comes in. Stay tuned to the CBS soap and don’t forget to check CDL often for the latest Young and the Restless spoilers, updates and news.

No intention of leaving!!!

I have actually never left, just for the record!