BY Heather Hughes on September 14, 2019 | Comments: one comment
Related : Soap Opera, Spoiler, Television, The Young and the Restless 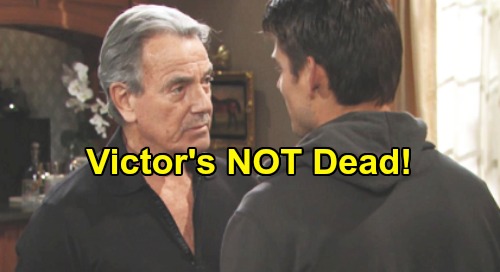 He’ll fear he’s killed his father through his pill swap, which was just meant to throw Victor Newman (Eric Braeden) off his game. Adam was hoping to worsen the side effects by giving Victor double the dosage. He’ll be rocked to the core as things seemingly grow dire.

Of course, things aren’t always as they seem on the CBS soap. Could this be a trap to catch Adam? We can’t forget that Nate Hastings’ (Sean Dominic) tablet was stolen, and he was convinced Adam took it.

It’s easy to imagine Victor, Nikki and Nate putting their heads together following Victor’s test results. Once Nate learned Victor’s dosage was too high, they may have solved the puzzle and determined that Adam was behind this. Considering all the rotten things Adam does on a daily basis, it wouldn’t have been hard to figure out – especially with the clues Y&R delivered.

Victor may be trying to pull a confession out of Adam and teach him a lesson. It’s rather cruel to put the rest of the family through this, but that’s soaps for you. Story comes first! Nick Newman (Joshua Morrow) didn’t offer a heads-up on his J.T. Hellstrom (Thad Luckinbill) mask plot either. At the time, his poor sister, Victoria Newman (Amelia Heinle), was terrified thinking her abusive ex was back from the “dead.”

Naturally, the rest of the family could know the truth soon enough. A new Young and the Restless preview video for the week of September 16 -20 shows Nick saying, “Dad is gone, and it’s your fault.” Nick is angry over his father’s death and as always is blaming Adam – although this time he’s right! Of course Victor is NOT dead and is involved in an elaborate plot the details of which will emerge when Y&R is ready to show them to us. However, there’s also a chance he’ll be in on this potential plot by then. He may help Victor and Nikki play Adam.

Nate says there’s no pulse in the Y&R episode airing September 13, but is that really true? The answer is no, according to Y&R spoilers and in fact Victor is faking this whole incident with Nate and Nikki’s help. In fact Eric Braeden has already confirmed on social media that Victor Newman is not dead and is very much alive.

No intention of leaving!!!