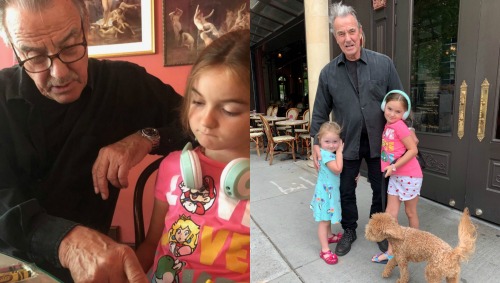 The Young and the Restless (Y&R) spoilers reveal that one CBS soap star has been doing some family bonding. Y&R fans know Victor Newman (Eric Braeden) is gearing up for quite the battle in Genoa City. Adam Newman (Mark Grossman) has vowed to take down his family, but Victor’s prepared for a fierce fight. Of course, he always keeps his softer side when it comes to his grandkids.

It turns out that’s one thing Victor and his portrayer have in common. Victor’s a loving grandfather, and it seems Braeden puts a little of himself into that part of the role. On Twitter, Braeden recently shared some adorable pics with his grandchildren. He helped his youngest granddaughter read a book and was on hand for his second eldest granddaughter’s coloring session.

It’s clear that Braeden loves those girls and every second he spends with them. Once their visit was over, Braeden expressed how much he was going to miss the kiddos. He tweeted, “Saying goodbye is always tough!!” As if the photo couldn’t get any cuter, it looks like the girls’ dog was having fun as well.

Braeden is quite the family man, and Victor has certainly been that way lately. Many Young and the Restless viewers enjoyed Braeden’s latest pics and tweeted him to say so. He even answered a few questions and revealed that he had been in Georgia, where his son and granddaughters live. Braeden added that he was headed back to LA, so he should be filming more Y&R scenes soon!

Braden retweeted a few of his favorite replies. “You are a great granddad on and off the screen,” gushed one Y&R fan. Another said, “Times like these are the ones you remember.” One more Young and the Restless watcher insisted, “Taking time out for…kids or grandkids is always time well spent.”

As for what’s next in Genoa City, The Young and the Restless spoilers say Victor and Adam’s war will get ugly! Let’s hope they can shield Christian Newman (Alex Wilson) and Connor Newman (Judah Mackey) from the chaos that’s brewing. We’ll give you updates as other Y&R news comes in. Stay tuned to the CBS soap and don’t forget to check CDL often for the latest Young and the Restless spoilers, updates and news.

Reading with the youngest! pic.twitter.com/0a9pY53Pic

With the second eldest! pic.twitter.com/lj80XlOQyJ

Reading with the youngest! pic.twitter.com/0a9pY53Pic