The Young and the Restless Spoilers: Eva LaRue Cast as Celeste Rosales – Rey and Lola’s Mom Heads to Genoa City

BY Heather Hughes on May 16, 2019 | Comments: 5 comments
Related : Soap Opera, Spoiler, Television, The Young and the Restless 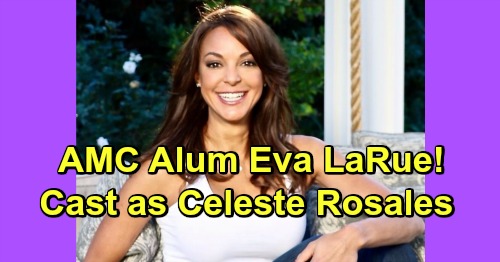 The Young and the Restless (Y&R) spoilers tease that a new character is headed to Genoa City, but she’ll be quite familiar to two GC residents. Rey Rosales (Jordi Vilasuso) and Lola Rosales’ (Sasha Calle) mom is coming to town! EW reports that AMC alum Eva LaRue has been cast as Celeste Rosales, so she’ll report to the studio for filming next week, May 20-24. That’ll put Celeste on canvas for her Y&R debut on June 26.

Lola and Rey have talked about their mother before. They have a far more complicated relationship with their father, but some Mommy issues are about to rise to the surface. The Young and the Restless spoilers say we’ll see tension once Celeste hits the screen, but we’ll undoubtedly see lots of love, too. That’s just how the Rosales family rolls. They clash, but there’s always a connection underneath.

There’s a good chance Celeste will disapprove of her children’s love interests because…well, that’s just what soap moms do. The Young and the Restless spoilers say Sharon Newman (Sharon Case) may want to watch her back. Celeste will likely be very protective of Rey since he was burned so badly by Mia Rosales (Noemi Gonzalez), who betrayed him and got knocked up by his brother.

Arturo Rosales (Jason Canela) will be busy building a new life with Mia in Miami, so that’ll leave Rey as the son for Celeste to pester. When she realizes Sharon has such a deep bond with Adam Newman (Mark Grossman), that could raise flags. The last thing Rey needs is another woman who’s obsessed with an ex, so Celeste may urge Rey to guard his heart.

Of course, Lola won’t be spared from drama either. She’s about to move in with Kyle Abbott (Michael Mealor), who’s still in the process of divorcing Summer Abbott (Hunter King). Something tells us Celeste may not be too happy that Kyle deflowered her precious baby girl!