BY Heather Hughes on May 16, 2019 | Comments: 2 comments
Related : Soap Opera, Spoiler, Television, The Young and the Restless 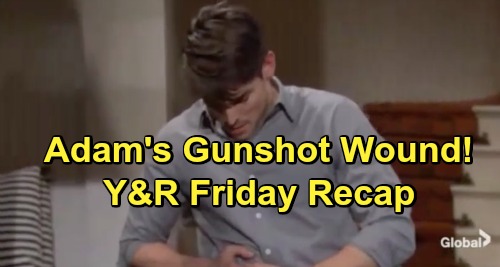 The Young and the Restless (Y&R) spoilers for Friday, May 17, tease that Arturo Rosales (Jason Canela) will open the paternity test results with Mia Rosales (Noemi Gonzalez). They’ll be ecstatic to learn Arturo is the father. Mia will make a speech about how they were meant to come together again before embracing Arturo. Later, they’ll talk about their Miami move and mention baby names.

At the cottage, Rey Rosales (Jordi Vilasuso) will show up to open his own envelope with Sharon Newman (Sharon Case). He’ll find out Arturo’s the “baby daddy” and suggest it’s for the best. Sharon will sense a hint of disappointment since Rey’s always wanted to be a dad. She’ll think it’ll happen for Rey someday and suggest he should hang out with Faith Newman (Alyvia Alyn Lind) soon.

At the tack house, Adam Newman (Mark Grossman) will be sleeping on the sofa when his secret partner texts again. This person will push Adam to lay low and promise details will follow. Next, Victor Newman (Eric Braeden) will have an idea about how to get Adam’s memories back. At Nick Newman’s (Joshua Morrow) place, Vic will arrive and insist Adam’s out in the car. He’ll argue that Nick can’t keep avoiding the issue, but Adam will appear and wonder what’s going on.

Victor will state that Adam’s going to meet Christian Newman (Jude and Ozzy McGuigen), which will catch Adam off guard. He’ll be taken aback to learn Nick’s been raising his son. Adam will side with an angry Nick on this one. He won’t think it’s right to barge in on his brother like this, but Victor will feel like this could spark a memory flood.

Adam will ultimately leave it up to Nick, who’ll let Christian see “Uncle Adam” for a minute. After Adam chats with kid, Y&R spoilers say Nick will take him away. Adam will speak with Victor again and confess that he didn’t feel anything toward Christian.

Once Victor and Adam are gone, Nick will look at some texts that Chelsea Newman (Melissa Claire Egan) sent him. We’ll see that Chelsea has tried repeatedly to get in touch with Nick over the last few months. Nick will contemplate texting back as Adam rips into Victor at the tack house. The Young and the Restless spoilers say Adam will get why he’s so hated and argue that he never should’ve come.

Victor will mention that he’s trying to track down Chelsea, but Adam will just be fed up with this mess. He’ll announce that he’s returning to Las Vegas and push Victor to leave. Victor will insist that Adam’s going to regret leaving. He’ll look deep in thought as he pauses outside.

Once Adam’s alone, he’ll pack up his stuff and hear a knock at the door. When Adam opens it, someone will fire a shot right into his abdomen. At the coffeehouse, Victoria Newman (Amelia Heinle) will assure Billy Abbott (Jason Thompson) of her love. She’ll also think that’s why they shouldn’t label their relationship and make it official through marriage.

Despite Billy’s frustration, Victoria will think this is the best plan for now. Billy will eventually decide it’s good enough as long as he’s got Victoria back and their family is reunited. They’ll discuss a gathering to celebrate getting back together before planning a private celebration – tonight in a suite.