The Young and the Restless Spoilers: Michael Targets Jack for Stealing Lauren’s Heart – Phyllis Gains a Vengeful Ally Against Jabot?

BY Kinsley Goldman on May 16, 2019 | Comments: one comment
Related : Soap Opera, Spoiler, Television, The Young and the Restless 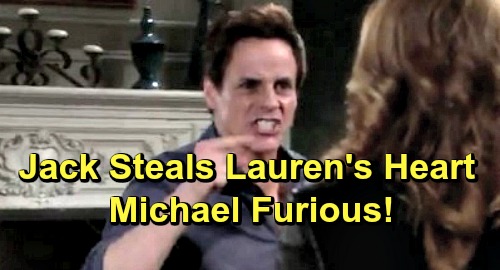 The Young and the Restless (Y&R) spoilers tease that Phyllis Summers (Gina Tognoni) may gain a surprising ally in her fight against Jack Abbott (Peter Bergman). She provoked Jack’s wrath by trying to access Jabot’s files, so he retaliated by giving her some competition. Jack is adding similar accessories to the Jabot Collective, which will make Phyllis’ uphill battle even harder.

Phyllis has been considering the knockoff route, but Michael Baldwin (Christian LeBlanc) warned her about peddling counterfeit goods. He wants Phyllis to get on a more positive path and stay out of Jack’s way. However, that could change as Jack and Lauren Baldwin’s (Tracey E. Bregman) relationship develops. Lauren is just a little too invested in Jack’s love life and happiness.

Y&R spoilers say Lauren may go against Michael’s wishes and so some matchmaking. She knows Jack does better when he’s in a relationship, so she may work hard to make it happen. As Lauren struggles to find Jack’s perfect match, could her own feelings turn more than friendly?

The Young and the Restless spoilers hint that Jack could feel a strong spark soon enough. Once his feelings grow, it’ll be easy for Lauren’s to do the same. Michael may not notice any changes at first, but he will if this keeps up. Will Michael sense that Jack poses a real threat to his marriage? If so, how far will Michael go to end this? We could see Michael start scheming to keep them apart.

Michael is one of the few friends Phyllis has left in Genoa City. She would be happy to have a partner in her fight against Jack. If Michael feels like Jack is making moves on Lauren, he could certainly go after him. Michael might even do it with the intention of severing Fenmore’s ties with Jabot. He could plot something that would become a breach of contract and give Lauren an out.

Of course, a plan like that could backfire and push Lauren in Jack’s direction. Michael could sabotage himself by taking that kind of risk. Then again, The Young and the Restless could hold off on Michael and Phyllis’ team effort. In that case, it might become a revenge plot after love blooms between Jack and Lauren. Michael could seek vengeance if a cheating scandal occurs.

Regardless, there’s undoubtedly a reason why Michael’s busy advising Phyllis and Lauren is busy worrying about Jack. It sounds like trouble’s brewing in Lauren and Michael’s relationship, so don’t miss the shockers ahead. We’ll give you updates as other Y&R news comes in. Stay tuned to the CBS soap and don’t forget to check CDL often for the latest Young and the Restless spoilers, updates, and news.