The Young and the Restless Spoilers: Adam Newman Rushed to Hospital After Being Shot, Memories Flood Back

BY Heather Hughes on May 15, 2019 | Comments: 3 comments
Related : Soap Opera, Spoiler, Television, The Young and the Restless 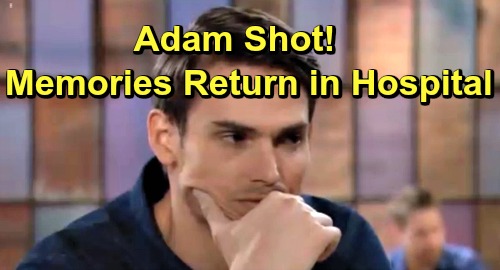 The Young and the Restless (Y&R) spoilers tease that a shocking shooting is coming up. After Adam Newman (Mark Grossman) decides to leave Genoa City, he’ll be gunned down by someone mysterious during the week of May 20 to May 24. There’s no word on who that might be just yet, but Y&R can explore that topic later. They’ll have other drama to let play out in the meantime.

Adam will be rushed to the hospital, so Victor Newman (Eric Braeden) will undoubtedly be concerned. The thought of losing Adam all over again will be tough to take. Sharon Newman (Sharon Case) will worry about Adam’s fate as well. She’ll hope for a positive outcome and her wish will ultimately come true.

The Young and the Restless spoilers say Adam will wake up and make a full recovery. In fact, this incident will seemingly be a blessing in disguise. When Adam awakens, he’ll reveal that he can remember everything. Something about the ordeal will bring it all back to him – at least that’s what Adam will claim.

Nick Newman (Joshua Morrow) will think all this seems a little too convenient. He’ll feel like Adam’s been playing games all along, so he’ll be keeping an eye on his brother. As for Victor, he’ll be ecstatic over Adam’s memory flood. Victor will insist that Adam needs to get back into the Newman fold. He’ll be eager to see Adam make a comeback at Newman Enterprises and take his proper place in the family.

Nick obviously won’t like that idea. The more support Victor gives Adam, the more likely it becomes that Adam will seek custody of Christian Newman (Jude and Ozzy McGuigen). We all know a custody battle is coming sooner or later!

Victoria Newman (Amelia Heinle) will fret about Adam shaking things up at the company. She’ll expect Victor’s going to hand Adam the world on a silver platter, and she’ll likely be right. Victor tends to favor Adam when it comes to Newman and sometimes life in general.

Of course, we can’t forget about Adam’s apparent scheme. He’s got a bag full of money and a partner in crime, so what are they up to? Could that person be the shooter? Is this all part of the plot or will an outsider throw them a curveball? Either way, Adam could roll with it and use the violent incident to his advantage.