BY Heather Hughes on May 15, 2019 | Comments: one comment
Related : Soap Opera, Spoiler, Television, The Young and the Restless 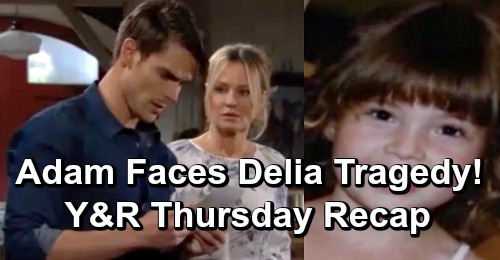 The Young and the Restless (Y&R) spoilers for Thursday, May 16, tease that Sharon Newman (Sharon Case) will head to the tack house. She’ll surprise Adam Newman (Mark Grossman) since he thought he locked the door. After checking on his cash stash, Adam will tell Sharon it’s his safety net. He’ll eventually realize someone else has been there as he notices a picture on the floor.

Adam will ask if he knows the girl in the photo. Sharon will see that it’s Delia (Sophie Pollono), so she’ll opt to let Victoria Newman (Amelia Heinle) fill Adam in. Over with Victor Newman (Eric Braeden), he’ll deliver instructions over the phone. Victor will want his minion to keep tabs on Adam, so he’s clearly trying to stay in control of this situation.

After taking a call from Sharon, Victoria will offer to meet Adam at Society. Abby Newman (Melissa Ordway) will already be there getting attention from Dr. Nate Hastings (Sean Dominic). He’ll encourage Abby to go out for drinks with him, but she’ll insist she’s sworn off men. Nate will try another tactic by flirting through a riddle. Abby will seem entertained until Adam walks in and gives her a shock.

When Abby realizes she was left out of the secret circle, she won’t be happy about it. Y&R spoilers say Adam will offer an apology before turning his attention to Victoria and Billy Abbott (Jason Thompson). Adam will ask who the girl in the pic is, but he won’t like the answer. Billy will pipe up that it’s his daughter and add that Adam killed her.

Victoria will quickly insist it was an accident, but Adam will be visibly shaken. He’ll get updates on the hit-and-run as well as the hidden evidence. Adam will understand Billy’s anger, so he’ll apologize for the pain he caused. Unfortunately, Billy will remain irate. He won’t think Adam can really be sorry if he can’t even remember what happened.

Adam will suspect that Victor planted the photo in hopes of jogging his memory. He’ll plan to stay on guard when it comes to his manipulative father. After Adam exits, a distraught Billy will seek comfort from Victoria. He’ll feel like the sorrow of losing Delia came rushing back through Adam.

However, Billy will hope Victor’s already on the verge of driving Adam away. He’ll expect Adam to head back to Las Vegas soon. At Newman Enterprises, Adam will barge in for a confrontation. He’ll be upset that Victor left him out of the loop on Delia. Adam will wonder what other secrets Victor might be hiding, but Victor will argue that he just didn’t want to overwhelm his son.

The Young and the Restless spoilers say Victor will keep pushing. He’ll think Adam has to learn everything about himself, but Adam won’t be so sure he wants to know. Later, Victor will get on the phone and leave a nasty message for Nick Newman (Joshua Morrow). He’ll be fed up with Nick for not returning his calls.

In Mia Rosales’ (Noemi Gonzalez) suite, she’ll bicker with Rey Rosales (Jordi Vilasuso). Arturo Rosales (Jason Canela) will be caught in the middle until Mia pushes for an honest discussion. They’ll all talk about the cheating drama, which will lead to some admissions and apologies.

Arturo and Mia will assure Rey of their great love for him. Rey will also confess that he didn’t acknowledge when his feelings for Mia changed. They’ll settle the conflict, but what about Mia’s confession to Paul Williams (Doug Davdson)? Rey will decide there may be a way for Mia to avoid prison, so he’ll head off to make his plea.

At the coffeehouse, Rey will assure Paul that Mia wasn’t trying to hurt Lola Rosales (Sasha Calle). Since Lola’s doctors caught her liver issue in time, Mia actually saved her in a way. Rey will note that Abby and Lola don’t want charges for Mia. He’ll also be sorry about the cover-up, but Paul will get that Rey did it for his family. Once Paul lets Mia off the hook, Rey will call her to share the good news.

At the cottage, Rey will bring Sharon up to speed on the paternity test and Mia being in the clear. Talk will turn to Adam, but Sharon will suggest putting that on hold. They’ll be making out when Adam arrives. Once Rey gives them some space, Adam will open up about the Delia revelations and Billy’s despair. He’ll have some self-hatred, but Sharon will insist Adam wanted to learn from his mistakes.

The Young and the Restless spoilers say Sharon will reassure Adam. She’ll make it clear that he can be the better person he was striving for. It sounds like the “Shadam” bonding will continue, so stay tuned. We’ll keep you posted as other Y&R details emerge. Stick with the CBS soap and don’t forget to check CDL often for the latest Young and the Restless spoilers, updates and news.