The Young and the Restless Spoilers: Week of May 20 Preview – Adam Gets Shot! – Mysterious Culprit Guns Down Brooding Newman

BY Heather Hughes on May 15, 2019 | Comments: one comment
Related : Soap Opera, Spoiler, Television, The Young and the Restless 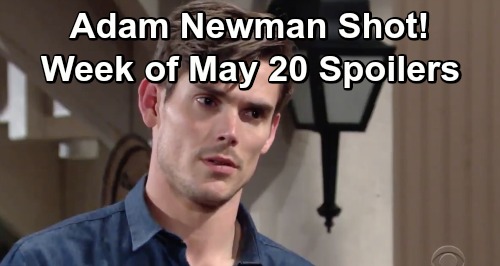 The Young and the Restless (Y&R) spoilers preview teases that Adam Newman (Mark Grossman) will make a big decision about his future. During the week of May 20-24, Adam will determine that it’s time to head back to Las Vegas. He’ll undoubtedly argue that he just doesn’t fit in this Newman world anymore. Adam may vow to resume his life as “Spider” and let the Newmans get back to their lives.

Sharon Newman (Sharon Case) will continue to feel a deep connection with Adam. She may urge Adam to stick around a little longer and see what happens, but Adam will insist on leaving town. He’ll shut down Victor Newman’s (Eric Braeden) push for him to stay as well.

As for the rest of the Newman clan, they should be relieved. Victoria Newman (Amelia Heinle) was glad to know her brother didn’t die in the explosion, but that doesn’t mean she trusts him. She views Adam as a master manipulator and plans to keep her guard up.

Nick Newman (Joshua Morrow) is also worried about a potential custody battle involving Christian Newman (Jude and Ozzy McGuigen). Others like Nikki Newman (Melody Thomas Scott) may just be glad things are getting back to normal. Billy Abbott (Jason Thompson) will certainly be pleased to hear the departure news, too.

However, this abrupt exit obviously won’t pan out. Mark Grossman is the new Adam and he’s here to stay! Y&R will need a reason for Adam to remain in Genoa City, and it turns out they’ll deliver a truly shocking one. The Young and the Restless spoilers say Adam will get shot before he can leave GC. A mysterious culprit will emerge from the shadows and pump a bullet in the brooding Newman.

Of course, there are lot of unknowns here. Who will be targeting Adam? Is this a real threat or just some kind of setup? After all, Adam has a secret partner that hasn’t been revealed yet. We really need to know where the bullet enters to determine if this is legit. A flesh wound could indicate that this is part of the scam. What better way to gain sympathy than to agree to leave town and get gunned down?

Then again, Adam’s got quite a few people who’d be willing to shoot him. This could be an actual enemy who’s out to get him. Regardless, The Young and the Restless say the mystery of Adam’s shooter will bring some twists and turns. We’ll give you updates as other Y&R details emerge. Stay tuned to the CBS soap and don’t forget to check CDL often for the latest Young and the Restless spoilers, updates, and news.