BY Olivia Marie on May 15, 2019 | Comments: one comment
Related : Soap Opera, Spoiler, Television, The Young and the Restless 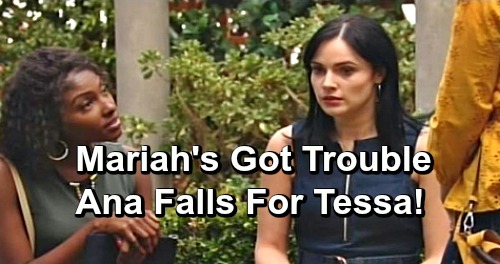 The Young and the Restless (Y&R) spoilers tease that Mariah Copeland (Camryn Grimes) will see trouble brewing with Ana Hamilton (Loren Lott). Tessa Porter (Cait Fairbanks) and Mariah have experienced many ups and downs, but nothing they couldn’t work out. However, with Ana, Mariah feels like she’s on the outside looking in and she doesn’t want to be pushed out of Tessa life.

For a relationship that many felt was iron clad, Tessa and Mariah will experience some tough times in the weeks ahead. Mariah cannot help but feel jealous over Tessa and Ana’s connection, even though it is work- related.

Y&R spoilers suggest that Ana may be interested in Tessa more than a work prodigy, she could be harboring romantic feelings for the musician.

About a week ago, Mariah recommended that Tessa wear Jabot Collective brand of clothes, if Ana wanted to change her girlfriend’s look. While Tessa appreciated her input, Ana seemed put out that Mariah would dare make a suggestion on how Tessa should dress.

Ana decided to open up to Devon Hamilton (Bryton James) about her frustration over Mariah’s meddling. Y&R spoilers say that Devon advised her to deal with it as Mariah will not back off from inserting herself into Tessa life. He added that Tessa and Mariah have been through a lot over the past few months and Mariah earned her spot as her better half.

It’s clear that Ana doesn’t really like Mariah and she’s trying to creating some distance between Mariah and Tessa. And, why would she do this if she wasn’t romantic interested in Tessa.

If Ana thinks Mariah will give up on Tessa without a fight, she is sorely mistaken. Y&R spoilers say that Mariah sense that something is completely off with Ana and she believes she is trying to come in between her and Tessa. However, she hasn’t come to the conclusion that Ana is trying to break them up so she can start a romance with Tessa.

So, buckle up Y&R fans, it looks like Mariah and Tessa is about to get a love triangle with Ana. Is it possible that Ana is the one sending Mariah threatening messages? Don’t forget to come back to CDL for more The Young and the Restless (Y&R) spoilers, news, and casting updates!